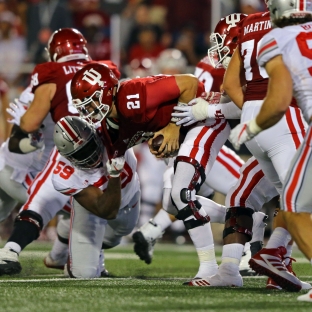 The marquee battle will likely be in the trenches when the Sooners have the ball.

Oklahoma returned all five starters on the offensive line from last season’s 11-2 team that ranked second in the nation in total offense — including massive tackle Orlando Brown, the reigning Big 12 offensive lineman of the year. The unit led the conference in fewest sacks allowed. Brown, protecting Mayfield’s blind side, allowed just one all year.

They will butt heads with Ohio State’s defensive line, one of the most talented and deepest fronts in the nation. The unit is led by defensive end Tyquan Lewis, last year’s Big Ten defensive player of the year, but ends Sam Hubbard, Jalyn Holmes and Nick Bosa are nearly as good. A rotation keeps all the linemen fresh.

“As talented as they are on the defensive line, you’ve got to be able to match that,” said first-year Oklahoma coach Lincoln Riley. “You’ve got to be able to keep them from just teeing off on you all game long. Certainly when you’re going to play a group like this, you’re happy to have a group like we have, a group that’s physical, experienced, where we have some depth. It’ll be a great matchup to watch.”

It’s gonna be a good one. pic.twitter.com/1j4Qt5Mzg5

In addition to the five starters on the Oklahoma line who have combined for more than 100 starts, two backups also have starts on their resumes. Brown, the 6-8, 345-pound left tackle, was a second-team All-American and is projected to be one of the top linemen in next spring’s NFL draft. He’s athletic with long arms and exceptional balance.

“It is a battle of strength on strength,” Ohio State defensive coordinator Greg Schiano said.

The protection from the offensive line allows the creative Mayfield to run around outside the pocket, wait for receivers to get open and improvise. Mayfield helped the Sooners average 56 points and nearly 500 passing yards per game last season, and containing him is a priority for the Buckeyes.

“You almost have to play the perfect game,” said Lewis, who led Ohio State in sacks the past two seasons.

Against Indiana last week, Ohio State at times displayed a five-man defensive front, with four ends on the field at one time. Schiano said he’ll continue to employ the set on third down and in certain other situations when the Buckeyes need maximum pressure.

MORE: Lamar Jackson’s run for a Heisman repeat is on

Brown welcomes the challenge, too.

“It’s cool to have that pressure from our peers and you all and our coaches to go out here and pretty much put things on us,” he said. “Normally, over the years, it’s not a lot of attention on the (offensive line) situation. I’m really looking forward to it up front.”