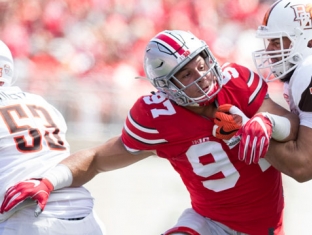 COLUMBUS, Ohio — Nick Bosa lives in the shadow of his superstar older brother Joey, one of the best defensive ends ever to play at Ohio State. That’s fine with the younger Bosa, who wears his brother’s famous number 97 and looks so much like him on the field that sometimes it’s hard tell Joey ever left.

Lofty expectations naturally followed Nick from Fort Lauderdale, Florida, to Columbus. He started slow because of a torn ACL suffered in high school. But he contributed last season, recording five sacks and seven tackles-for-loss. Not bad for a true freshman.

Now working in a new scheme freeing up defensive ends to go after more sacks, Bosa is more comfortable on the field, his first step is quicker and his pass rush is, in his words, “going crazy.”

Bosa’s biggest challenge will be to distinguish himself on a line loaded with talent and on a defense that should be one of the best in the nation.

He’s not even a starter. Those guys are Tyquan Lewis, the reigning Big Ten defensive player of the year, and Sam Hubbard, who had 46 tackles last year, 8.5 of them for a loss.

Bosa also is competing for time with senior Jalyn Holmes and promising youngsters Jonathan Cooper and Chase Young. Defensive line coach Larry Thompson likes to use a rotation to keep them fresh, so it’s going to be harder for any one of them to pile up the monster stats owned by Joey Bosa, now a star with the Los Angeles Chargers. (148 tackles and 26 sacks in three seasons at Ohio State).

But Nick Bosa likes the scheme installed by defensive coordinator Greg Schiano after co-coordinator Luke Fickell left to coach Cincinnati. It allows defensive ends to rush hard on earlier downs, instead of trying to tie up offensive linemen and waiting to make plays at the line.

“The scheme coach Fickell (had), we set up plays for the linebackers to make,” Bosa said. “Now, it’s us pinning our ears back instead of sitting at the line and waiting….It was definitely frustrating just being tight on the (offensive) tackle.”

The group will be boosted by the return of Tracy Sprinkle, an emotional leader who earned a starting job last year only to suffer a season-ending knee injury in the opener. The 6-foot-3, 290-pounder will play nose guard.

MORE: Who’s had the most combined college football and basketball success in the last decade?

Tackles Dre’Mont Jones, a defensive end who was moved inside last year, and Davon Hamilton also return. So does Robert Landers, who was a pleasant surprise as a true freshman last year.

Offensive coordinator Kevin Wilson insisted that a backup quarterback hadn’t yet been picked when Joe Burrow broke his throwing hand during practice on Monday.

Now Dwayne Haskins definitely will back up starter J.T. Barrett, but unless Barrett gets hurt that likely means some meaningless mop-up duty against overmatched opponents. Wilson said Haskins, a redshirt freshman who hasn’t taken a game snap, is ready for game action.

“He’s going every day (in practice) against a pass rush that’s intense, with multiple looks and coverage scenarios, so he’s been stressed every day at a high level,” Wilson said. “So The only thing different is there are going to be people in the stands.”

Burrow’s injury could have an effect on whether true freshman Tate Martell ends up redshirting this year.

Ohio State hasn’t said how long Burrow will be out. He had surgery Tuesday to repair the injury he suffered when his hand hit another player’s helmet.