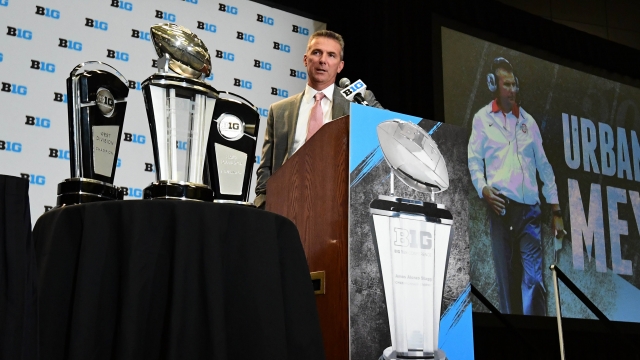 CHICAGO — The tailored, slate-gray suit, the scarlet and gray power tie, the blacked-out chronograph on his wrist — if you didn’t know Urban Meyer was the football coach at Ohio State, your first guess would be a Fortune 500 CEO.

After five seasons in Columbus, Meyer has the Buckeyes running as smoothly as any business enterprise in the land. He’s won a third national championship there (to go along with two from Florida), a conference title and two division titles, and Ohio State is favored to return to the top of the Big Ten heap and compete for another college football crown.

All that despite getting smoked 31-0 by Clemson in the playoffs last season, then watching five players depart in the first round (and a dozen total) in the NFL draft.

“It’s in the back of everyone’s mind, and whether I’ll use that during training camp or not is to be determined,” Meyer said about that season-ending loss during Monday’s session at the Big Ten media days. “But where we’re at as a team, I like where we’re at. So we’re just pushing forward.”

Last season, Meyer had three rookies in the defensive backfield, the same number he wound up losing to the pros. This time around, the quarterback competition will be limited to who’s backing up J.T. Barrett. But the coach will have to sort through seven candidates for starting right guard, leaving one rival supporter to grouse that any of the runners-up could start for nearly every other team in the conference.

Meyer’s demeanor reflects the stability he’s brought to the program, and his willingness, finally, to share some of the responsibilities of the job. That’s a far cry from the anxiety-ridden days that led to his well-publicized burnout after taking Florida to the top of the sport.

That’s probably not a coincidence, either.

“He had a (first) grandchild,” center Bill Price said. “I mean, babies — what do babies do to men? I tell him that all the time. … (In pictures) he’s holding that child like he was holding the championship trophy, and it’s the cutest thing in the world.

“I give him a hard time about it all the time,” Price added. “He has become a little bit more, I guess, quote-unquote ‘mild.'”

Linebacker Chris Worley thinks the mellower version of Meyer was mostly for the offseason. He expects the glow to wear off as soon as Meyer steps onto the practice field later this week.

This article was written by Jim Litke from The Associated Press and was legally licensed through the NewsCred publisher network. Please direct all licensing questions to legal@newscred.com.