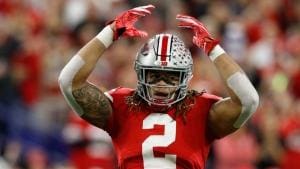 
Ohio State missed out on the College Football Playoff last season, but finished the year 13-1 while beating Washington 28-23 in the Rose Bowl.

Here is the full, detailed schedule for Ohio State’s 2019 football season, with past games and results first, then the TV schedule for future games below.

You can find tickets to each of Ohio State’s home games here. Prices range from $48 to $223.

The Buckeyes went 13-1 last year, beating their opponents by an average score of 42-26. Their lone loss came in the regular season to Purdue, which won at home, 49-20.

Here’s what happened in every game of Ohio State’s 2018 schedule:

The Buckeyes lost two huge names to the 2019 NFL Draft. Defensive end Nick Bosa was taken second overall by the San Francisco 49ers, while quarterback Dwayne Haskins was the 15th pick, taken by the Washington Redskins.

Quarterback Justin Fields transferred to Ohio State from Georgia, and is the likely starter in Haskins’ absence. In limited action for the Bulldogs, Fields threw for 328 yards (8.4 yards per attempt), 4 touchdowns, and 0 interceptions, while running for 266 yards (6.3 yards per rush) and 4 touchdowns.

Running back J.K. Dobbins rushed for 1,403 yards and 7 touchdowns as a freshman, and followed that up with a 1,053-yard, 10-touchdown performance as a sophomore. He also made strides in his receiving game, where he caught 26 passes for 263 yards and two touchdowns. With a fresh face under center, expect Dobbins to have a significant workload as a junior.

Behind senior Parris Campbell, wide receiver KJ Hill was Haskins’ favorite target last year, racking up 67 catches for 831 yards and 6 touchdowns. He’s shown steady improvement in each of the past three seasons, so look for big things from the senior.

We have Ohio State at No. 3 in our preseason Top 25. Here’s that breakdown:

Urban Meyer, QB Dwayne Haskins, RB Mike Weber and WR Parris Campbell are all gone. But new head coach Ryan Day and QB Justin Fields (UGA transfer) might be even better on offense. J.K. Dobbins will regroup to become a menace for defenses, plus DE Chase Young will lead what will be an even better defense.