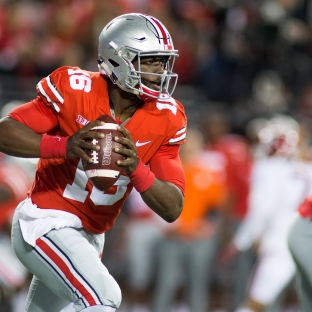 J.T. Barrett is in his fourth season as Ohio State’s starting quarterback, but Penn State coach James Franklin said it feels longer than that.

“I think this is his 16th year, maybe going on 17,” Franklin joked Tuesday.

He’s playing the best football of his career. He leads the Big Ten in pass efficiency, completing 66.7 of his throws for 1,838 yards and 21 touchdowns with one interception. He also leads the conference with 313.9 total yards per game.

Led by Barrett, the Buckeyes rank second in the nation with 47.3 points per game and are third with 577.3 yards per game.

“You have to completely respect everything that the guy’s been able to do in his career,” Franklin said. “Everything I know about him and have heard about him, he’s a class act.”

MORE: A look at each remaining undefeated team in college football

But the Nittany Lions found a way to neutralize the Wolverines, opened enough holes for Penn State to rush for 224 yards and protected quarterback Trace McSorley enough for him to throw for 282 yards.

“I thought we were very physical,” Franklin said. “We challenged the team about that on both sides of the ball.”

Redshirt freshman Will Fries made his second start in three weeks at right tackle, which had been a problem spot for Penn State.

The offensive line struggled to create running room for Saquon Barkley against Northwestern and Indiana. Penn State ranks fifth in the Big Ten in rushing, but third in yards per carry (5.0).

“They’re getting better,” Franklin said. “I know everybody wanted every position to be hitting on all cylinders in the beginning of the season, but that’s just not how it works.

“I love those guys. We have to keep developing them and coaching them. They’re getting better.”

RELATED: How CFB national champions can lose at home and still win the title

McSorley was named the Davey O’Brien National Quarterback of the Week after he passed for 282 yards and one touchdown and ran for 73 yards and three scores against the Wolverines.

This article is written by Written Rich Scarcella from Reading Eagle, Pa. and was legally licensed via the Tribune Content Agency through the NewsCred publisher network. Please direct all licensing questions to legal@newscred.com.