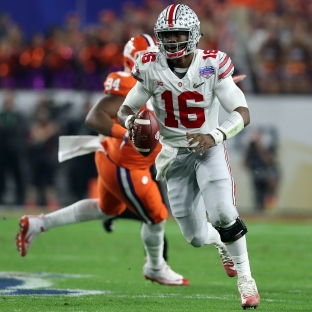 COLUMBUS, Ohio — Ohio State quarterback J.T. Barrett is an oddity in modern college football, an elite player who stuck around for five years, a guy who helped win a national championship but still has something to prove.

The 22-year-old Texan is again in the driver’s seat in an Urban Meyer offense that’s been a revolving door for coordinators who haven’t found the right formula to get Barrett back to the kind of consistent play that propelled the Buckeyes to the 2014 national championship.

Barrett, who is 26-4 as a starter and the only three-time captain in Ohio State history, said he’s been working with new offensive coordinator Kevin Wilson on tempo, footwork, accuracy and other issues that led to breakdowns last season, particularly in the humiliating 31-0 loss to eventual national champion Clemson in the Playoff semifinals.

RELATED: 5 things to know about OSU | Meyer has OSU running like well-oiled machine

“He wants to get better,” Wilson said. “He’s a very mature kid who’s hungry and working hard. When your best players are veterans, they’ve played a lot and yet they’re working harder, that is a great image as a coach.”

Barrett is surrounded by talent.

Junior receiver Parris Campbell started nine games last year and will slide into the hybrid H-back slot that made a star out of Curtis Samuel last season. He is one of a half dozen likely candidates to emerge as the deep threat that was lacking last season.

Mike Weber, who rushed for 1,119 yards as a redshirt freshman, anchors the backfield. With a year under his belt, he could be electrifying.

“We didn’t like how we finished last season, but I feel like we’ve got the guys to redeem ourselves and go harder,” Holmes said. “We know what it takes.”

Some other things to watch as the season arrives:

Meyer always says that the passing game starts with the offensive line, and the Buckeyes struggled last year to give Barrett enough time in the pocket. Barrett was often forced to run from defenders crashing in from the edges. Guard Michael Jordan was the first freshman to start on Ohio State’s offensive line in two decades.

Related: 50 storylines and questions for the 2017 college football season

Billy Price, who has started every game in the past three seasons, moves over to center to replace All-American Pat Elflein. The competition for Price’s right guard spot will be one of the most intense of fall camp.

It’s early this year, an away game against Big Ten foe Indiana on Aug. 31. The Buckeyes will then get another early test against Oklahoma in the home opener.