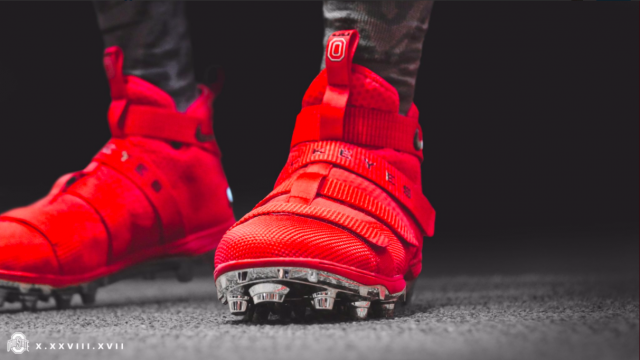 Saturday’s clash between No. 2 Penn State and No. 6 Ohio State might be the best game of the entire college football season.

Ohio State is trying to push its way back into the Top 5 after an early-season loss to Oklahoma, Penn State is trying to stay perfect, and both teams are vying for spots in the upcoming College Football Playoff. College GameDay will be there. Saquon Barkley will play. J.T. Barrett will play.

College football: Penn State vs. Ohio State shaping up to be Game of the Year

Which means the Buckeyes, the hosts for Saturday’s game, have decided to go all-out with custom uniforms for the game, which they unveiled Monday afternoon. Take a look:

These are certainly a departure from their traditional white-and-scarlet emphasis, but the Buckeyes still retain plenty of class OSU design flair.

The two-toned greyscale design means any splash of color — like the buckeye helmet decals, bright shoes, and well-placed “O” collar insignia — pops even more than usual.

And the fur pattern in the numbers, seen below, is a nice subtle design touch, a nod to the “Land of the Wolves” mentality the Buckeyes took on before the 2016 season.

Will these all-greys be enough for the Buckeyes to overcome the power of Heisman hopeful Barkley and the high-powered Nittany Lions? That remains to be seen. All we know now is, when the two teams take the field Saturday, Ohio State’s going to look sharp.

Share. Twitter Facebook Google+ Pinterest LinkedIn Tumblr Email
Previous ArticleWomen's basketball preview: Will Baylor or Texas prove to be the best team in the Big 12?
Next Article Vote: Does Fresno State or Georgia have a better NFL/MLB/NBA trio?