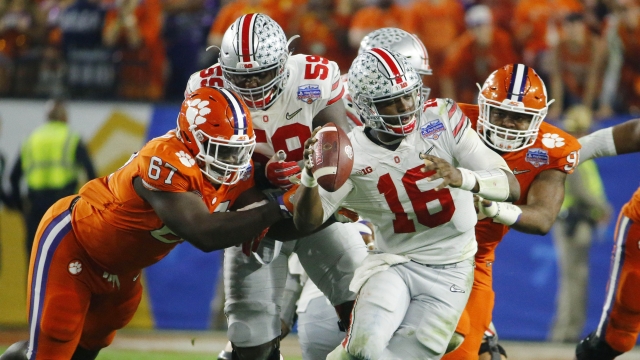 Ohio State football: 5 things to know about the Buckeyes this upcoming season

CHICAGO — Three trophies stood next to Urban Meyer as he spoke at Big Ten media days. There are always trophies. A college football coach is either posing next to them, hoisting them in the air or agonizing over a lack of them in his trophy case.

The two Big Ten division trophies and the Big Ten championship trophy were front and center Monday at the McCormick Center on the banks of Lake Michigan. Seven Big Ten coaches met with the media Monday. Michigan’s Jim Harbaugh and six other coaches will see the trophies on Tuesday as the event concludes.


As good as Meyer’s Ohio State Buckeyes have been in recent years, they haven’t won a Big Ten division title since 2014. Once again, they will be big favorites this fall. The quest for a trophy or trophies begins Thursday when Ohio State starts practice. The talk and the hype began Monday.

“It’s our sixth season,” Meyer said. “Hard to imagine how time flies. Last year we were the youngest team in college football, and this year we’re not. We lost six juniors to the NFL draft, nine the previous year. So there are obviously some shoes to fill. But we have three fifth-year seniors (Billy Price, Tyquan Lewis and Chris Worley) here representing Ohio State at Media Day, and I don’t know if I’ve had that before. Nowadays, fifth-year seniors at Ohio State are hard to find.”

Here are five highlights from day one:

1. Instant impact: All eyes will turn to Ohio State’s offense and fifth-year senior quarterback J.T. Barrett this fall. The Buckeyes suffered their first shutout loss since 1993 in January in the Fiesta Bowl, losing 31-0 to Clemson. Meyer experienced his first shutout as a head coach.

Adding former Indiana head coach Kevin Wilson to the staff as the offensive coordinator should boost the passing game that slumped the last two seasons.

“Kevin Wilson is the first established offensive coordinator I’ve ever hired,” Meyer said. “If you go through the history, either guys were promoted on my staff or there was a young up-and-comer like a Tom Herman. But this is a veteran coach that’s led some of the top offenses in America. He’s very well respected in our profession.”

2. Ancient history: Meyer hasn’t brought up the Fiesta Bowl loss with his team. He has yet to decide whether he will.

“I’ve been asked that a lot,” Meyer said. “And we kind of let that one go. We’ve been known in the past to use different forms of motivation, a loss here or there or whatever have you. That ship has sailed. It’s gone. And we’ve not addressed it. We’ve not talked about it. Professionally, it changed how we do some business on offense and we’re moving forward. So it’s in the back of everyone’s mind, and whether I’ll use that during training camp or not is to be determined.”

3. Position battles: When practice starts, the Buckeyes will look to settle on starters at right guard, tight end and the boundary safety position. The receiver position is wide open as well.

“We were not where we needed to be (at receiver) a year ago,” Meyer said, “and we have some talent. More than that, we have as high character a group as we’ve ever had in that room as far as work ethic, doing things right.”

4. Equal footing: Ohio State hopes to play in the College Football Playoff for the third time in four years. Ohio State, Alabama and Clemson have won the first three national championships of the playoff era. Meyer wanted to close the gap between the Big Ten and the Southeastern Conference when he was hired, and by all appearances, he has helped the Big Ten do that.

“I don’t think there’s a gap at all,” Meyer said. “And that’s no disrespect to other conferences. I’ve coached in the SEC East when that was one of the strongest in the country. And I think the Big Ten East right now is every bit as strong as I can remember the SEC East.”

5. The Game: Ohio State will play at Michigan on Nov. 25. Meyer is 5-0 against the Wolverines. The game last November in Columbus, won 30-27 in double overtime by the Buckeyes, will go down as one of the most memorable games in the history of the series.

“I’m very biased on this opinion of this rivalry because I grew up in it,” Meyer said. “I know it as well as any rivalry. I think it’s the greatest rivalry not just in college football, but all of sport. Again, it’s a very biased opinion. I’ll be the first to admit that.”

This article is written by David Jablonski from The Dayton Daily News and was legally licensed via the Tribune Content Agency through the NewsCred publisher network. Please direct all licensing questions to legal@newscred.com.