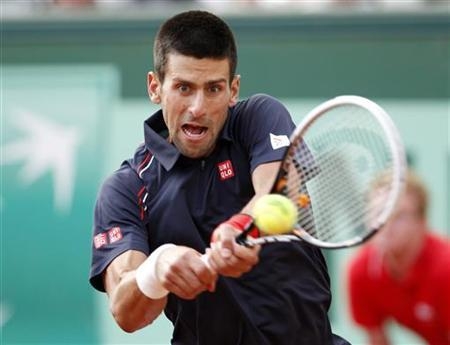 Novak Djokovic, the world’s No. 1 ranked men’s tennis player would be wise to focus fully on his opponent, 33rd-ranked Florian Mayer of Germany. Despite Djokovic’s lofty ranking, Wimbeldon has already seen one star, No. 5 Rafael Nadal, be knocked off early. Djokovic’s attempt to avoid a second shocker in the men’s draw can be live streamed here.

Nadal was handled by unheralded Steve Darcis, in straight sets, after winning the French Open just a few weeks ago. Nadal was the man who eliminated Djokovoic from contention, and after one day upsets abound in both the men’s and women’s draws.

Working in Djokovic’s favor against Mayer is familiarity. He is 3-0 in his career against the German and Mayer will be hard-pressed to surprise the top player in the field. The two even met at Wimbledon in 2011, where Djokovic cruised by Mayer in straight sets en route to a Wimbeldon title.

Today will be the first grass tournament for Djokovic this year, while Mayer reached the quarterfinals of a tournament in Halle, but that will not likely matter too much. He has not beaten an opponent ranked in the top ten this year.

Despite all that’s working in Djokovic’s favor, his comments prior to today’s match indicate he’s taking Mayer very seriously. “He’s a tricky player,” Djokovic said. “He has a bit unorthodox game. He can be very dangerous on this surface. He loves playing on grass. If you look at his career, he’s made his best results, I think, on grass. Strong backhand. He’s tall. He can serve well.”

He also made clear that his lack of grass action will not affect his play during Wimbledon. “It’s not the first time that I find myself in the situation where I don’t have any warm-up grass court tournaments. I need to prioritize and rest and recovery rather than just going for the matches on the grass, which is the fastest surface in our sport. I’ve done it before and I’ve managed. But adapting from the slowest to the fastest surface in only a few days is really a short time, you know. But it’s been like that for a while now.”