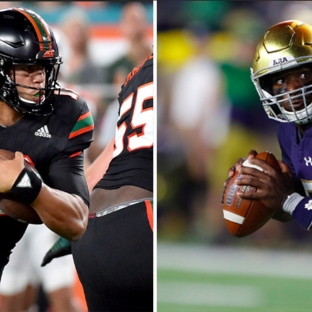 He sees one every day at practice in his signal-caller, Brandon Wimbush.

Wimbush is a little taller and a little heavier than Rosier, but there are a lot of similarities. The juniors are first-year starters, and their abilities to run, throw and make good decisions are big reasons why Saturday night’s showdown between the third-ranked Fighting Irish (8-1, No. 3 CFP) and the unbeaten Hurricanes (8-0, No. 7 CFP) has added spark, as if the rivalry needed anything more combustible.

Miami receiver Braxton Berrios said Rosier’s poise has rubbed off on the rest of the offense — and was steeled by the Hurricanes needing to pull out four straight close wins before getting past Virginia Tech relatively comfortably this past weekend. Rosier completed 11 of 22 passes for 202 yards, overcoming three interceptions, and rushed for 84 yards while accounting for three scores (two passing, one rushing) in the 28-10 victory.

“I think he gained all that from those big moments that we had earlier in the year,” Berrios said. “At Florida State, the last two drives we had, we executed and that builds confidence, that builds a culture of finding a way to win.”

Rosier isn’t just doing it with his arm.

Miami has never been known for having the most mobile quarterbacks — the great ones have usually been the pro-style, pocket-presence types — but Rosier is a weapon as a ball carrier as well. He has three rushing touchdowns, the first Miami quarterback with that many since 2007, and has a penchant for turning near-sacks into positive yardage.

“It is actually something new you see with Miami,” Virginia Tech defensive coordinator Bud Foster said.

Foster isn’t the only coach who’s faced Rosier this season who is giving the Miami quarterback high marks.

Rosier will see a mirror image of himself across the field on Saturday.

Wimbush has rushed for 639 yards and 13 touchdowns, the most in a season by any Notre Dame quarterback. He has thrown for 1,286 yards and 11 touchdowns with just two interceptions, the last coming against Boston College in the third week of the season. Last week, he threw for a career-high 280 yards, surpassed the 100-yard rushing mark for the fourth time with 110 and accounted for three touchdowns (one passing, two rushing) in a 48-37 victory over Wake Forest despite suffering bruised left hand in the first half.

A few moments from No. 3 Notre Dame’s win over Wake Forest. #GoIrish pic.twitter.com/bYjeyXPgY3

“I think I made the plays necessary to win the game,” Wimbush said. “I think I left a lot of plays out there that when we face an opponent who takes advantage of me not making those plays, it will cost us.”

It could this weekend against a lightning quick Miami defense that is No. 1 nationally in tackles for loss (8.8 per game), fifth in sacks (3.5 per game) and 10th in turnovers gained (20).

Rosier will be facing an Irish defense that has 19 takeaways, including nine interceptions, two of which have been returned by cornerback Julian Love for touchdowns.

RELATED: Teams that (we think) control their own destiny

Rosier, obviously, has mostly seen tape of Notre Dame’s defense. But he has respect for the Irish offense as well, and knows that unit will put pressure on the Hurricanes to get some points on the board.

“I think it’s going to be a great defensive battle, kind of like how it was last week,” Rosier said. “They have a good offense, but if you’ve seen our defense, they play lights out. We just have to come out and execute, can’t have as many turnovers as we’ve had and just have to make sure we put our defense in a great situation.”

This article was written by John Fineran from The Associated Press and was legally licensed through the NewsCred publisher network. Please direct all licensing questions to legal@newscred.com.