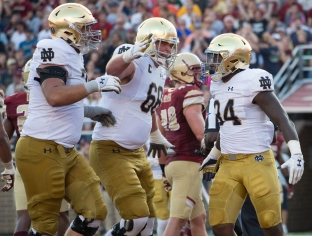 SOUTH BEND, Ind. — No. 22 Notre Dame is off to a 3-1 start and much of the credit goes to its offensive line. The Irish are ranked No. 7 in the country in rushing at 293.5 yards per game and third nationally with 6.83 yards per carry. The line has paved the way ever since a Sept. 9 loss to Georgia. Notre Dame hosts Miami of Ohio on Saturday. win led by a record-breaking rushing performance against Boston College, Notre Dame center Sam Mustipher didn’t seem to have any good reason to be ticked off.

The Irish senior found one anyway.

Mustipher helped Notre Dame run away from the Eagles in a game where the Irish recorded 515 rushing yards, featured two 200-yard rushers for the first time in school history and set a single-game record with 10.1 yards per carry.

So what was all the fuss about?

Coach Brian Kelly said it was because there wasn’t enough postgame production love to go around for Mustipher.

“We do a highlight video of our offensive linemen and he was not on the clips last week,” Kelly said. “Not that he didn’t play great, because he played pretty good. But there were some hellacious hits from some other players, and (Mustipher) took that personally.”

When your O Line is all you see is green! #GoIrish pic.twitter.com/h6YGKUZEHZ

So much so that Mustipher stole the show in the video recap after his team’s 182-yard rushing performance and 38-18 win last Saturday at Michigan State.

“He was all over this week’s highlight clips,” Kelly said. “And that’s the kind of pride he has in his performance.”

Kelly has emphasized several winning “traits” since spring ball, and they are taking hold along the Irish offensive line. No. 22 Notre Dame (3-1) enters its game Saturday against Miami of Ohio (2-2) ranked No. 7 in the country in rushing at 293.5 yards per game and third nationally with 6.83 yards per carry.

“I mean, we have a fantastic offensive line, it’s just amazing to run behind those guys,” said junior tailback Josh Adams, who is averaging 7.68 yards per carry this season and ranks 14th in the country in rushing with 124.8 yards per game. “We want to repay them for all the hard work they’re putting in.”

Junior quarterback Brandon Wimbush is also benefiting. The first-year starter ranks 37th overall and is first among non-option quarterbacks with 91.5 rushing yards per game. He also leads all Notre Dame players with seven rushing touchdowns, five of those in the last two games after the Sept. 9 loss to Georgia in which the Irish had a paltry 55 yards rushing at 1.5 yards per-carry.

“We know what we did against Georgia and what we needed to improve on,” Kelly said. “We knew we needed to do things better as a coaching staff and put our kids in better positions. But it’s just a group that was still evolving and still coming together.”

To a player, the linemen also point to a more rigorous conditioning program as an important reason for improvement. Notre Dame blew five fourth-quarter leads last season and lost seven games by one possession, a couple signs of fatigue.

This year, senior tackle Mike McGlinchey said the work through the offseason and during practice has brought a different feel on game days.

“With games, it’s actually a lot easier than it is throughout the week because with games, we get breathers when the defense goes onto the field,” McGlinchey said. “We’re still keeping up with our football conditioning and that aspect every week, but yeah, absolutely feel strong, feel conditioned and feel just ready to go snap by snap for four quarters.”

Some of the credit has to go to line coach Harry Heistand, along with his two prized pupils on the left side with Quenton Nelson at guard and McGlinchey at tackle.

Strong words of praise for our QB coming from the big man up front! #GoIrish pic.twitter.com/xAVEKRisxn

Only Alabama has produced more top draft picks on the offensive line than Notre Dame has during Heistand’s tenure.

Now in his seventh season with the Irish, Heistand has had four of his offensive lineman chosen in the first three rounds of the NFL draft. Alabama has five, but with Nelson and McGlinchey both projected as first-round picks after this season, expect those Notre Dame draft numbers to grow.

“Stay away from those two,” Kelly said of his left side. “They have a mindset of wanting to dominate, and that’s a pretty good thing.”

This article was written by Todd Burlage from The Associated Press and was legally licensed through the NewsCred publisher network. Please direct all licensing questions to legal@newscred.com.