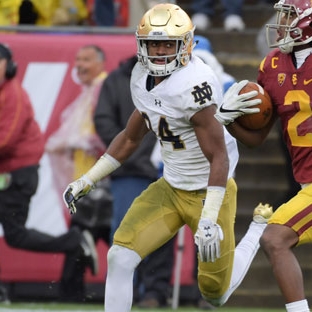 SOUTH BEND, Ind. — Nick Coleman’s career as a Notre Dame cornerback started to end as soon as it began.

In his first start at the position, Coleman was exposed by Texas in last year’s season opener. Wide receiver John Burt ran past Coleman for a 72-yard touchdown reception and took Coleman’s seemingly bright future with him in a 50-47 (2OT) Longhorns upset of the Irish.

Coleman, a sophomore at the time, made one more start at cornerback two weeks later. Then he was stripped from the starting lineup for good to clear the way for freshman understudies.

Suddenly, Coleman realized he had a lot left to learn.

“That’s a big learning experience for anyone,” Coleman said. “Just handling adversity and coming to work every single day with a purpose. It starts before fall camp. You can’t just get to fall camp, say you’re going to do your thing and then start the season. It doesn’t work like that. You have to come in every day with a workman mindset and attack it.”

In the midst of Notre Dame’s 4-8 season in 2016, Coleman admits he didn’t have time for much self-reflection. He waited until after the season to try to figure out what went wrong for himself and how he could improve.

Lock in with us all season long. #GoIrish pic.twitter.com/ejo20f1JF4

Then new defensive coordinator Mike Elko gave Coleman a chance to erase his past. Instead of giving cornerback another try, Coleman was moved to safety.

“It was a good way to turn the page and start fresh,” Coleman said. “That’s what I’ve done. I feel comfortable, but at the same time I feel like I have to press more on the gas this year. That was starting in January. Everything falls into place. Everything fits together, which is something I learned from last year.”

The lessons have put Coleman in a familiar position: a chance to take the field in the season opener as a starter. The 6-foot-1, 192-pound junior has remained one of the few constants at safety throughout the spring and preseason camp.

Head coach Brian Kelly praised Coleman’s productive summer in his first press conference ahead of the 2017 season. Coleman’s was the first of many names mentioned when Kelly was asked to identify defensive players on the verge of taking their game to the next level.

The rhetoric could be easy to doubt. One reporter recently asked Coleman if he was surprised to be running first string.

A year ago, Coleman was labeled a rising defender. But he may finally be in the right position to take advantage of his strengths as a player.

“A couple practices in playing at safety, I fell in love with it,” Coleman said. “I love being back there, telling people what to do, getting everybody lined up and playing from there.”

Coleman came to Notre Dame out of Kettering (Ohio) Alter with more experience as a running back than a defensive back. His transition didn’t go as smoothly as that of former Irish cornerback KeiVarae Russell, who made the same switch in his first year at Notre Dame.

Defensive backs coach Todd Lyght noticed last season that Coleman wasn’t playing at the same speed defensively that he had shown as an offensive player. But the move inside to safety should put Coleman in a more comfortable position. At least that’s how Lyght sees it.

“Making the transition — not having the ball in his hand and moving backwards — his game speed really wasn’t up to snuff,” Lyght said. “He had to really lock in on playing fast defensively. Moving inside, his vision of the game and the way he sees the game is a little bit more natural for him, coming from the running back position and now converting to safety. That transition has been good.

“Coach Elko working with him has really brought his game along. His football intelligence has increased. His awareness tactically has really improved in understanding exchanges, the way offenses want to attack us through the way they line up. He’s going to have a big season. I’m really excited about his progression.”

Elko, who now coaches the safeties on a daily basis, has monitored Coleman’s evolution closely.

“He’s getting more comfortable every day,” Elko said. “Seeing the game from the inside is harder. Maybe not harder, but different. Each rep he gets helps him get better at that. He’s been a lot better this fall than he was in the spring just because of that.”

Take a look at some of the details from our ROCKNE Heritage Uniform.#GoIrish pic.twitter.com/mDNRZvpuhs

When the defense breaks into individual units, Elko trains the safeties on technique and scheme. It’s a direct line of communication with the coordinator that Coleman appreciates.

“Having him work with us every day, you get to really understand the defense from the man himself,” Coleman said. “He explains pretty much everything to us. Everything that we can get.

“He’s done a great job in practice showing us the look that we will get, every single look that the offense will give to us. It’s been great having him.”

Coleman’s past as a cornerback will continue to impact his play at safety. He knows how much cornerbacks rely on their safeties. He brings the ability to cover receivers in space. Tackling will be a challenge, but that’s been a major focus in camp.

Despite all the positive momentum, a starting role isn’t guaranteed for Coleman. The Irish brought in Navy transfer Alohi Gilman to add to the competition alongside Jalen Elliott, Devin Studstill and Isaiah Robertson. Gilman, whose eligibility to play this season remains under NCAA appeal, has been rooming with Coleman in his first camp with the Irish.

“He’s a big hitter. He learns really fast,” Coleman said of the 5-11, 199-pound sophomore. “It’s been great having him with me being my roommate. He’s a cool guy. He should help us a lot this year. Hopefully.”

“Hopefully” seems to be an apt word for Notre Dame’s safeties entering the season. Each player on the depth chart is looking to answer significant questions at the position. If they’re going to put last season in the past, who better to become the face at safety than Coleman?

“We’ve all really done our best at really understanding this defense with coach Elko,” Coleman said. “I’ve done my best to take what he says and apply it to the field. That’s really it. A big thing we’ve done this year is talk about the mental side of the game. The traits. Just trying to do what I can.”

This article is written by Tyler James from South Bend Tribune, Ind. and was legally licensed via the Tribune Content Agency through the NewsCred publisher network. Please direct all licensing questions to legal@newscred.com.