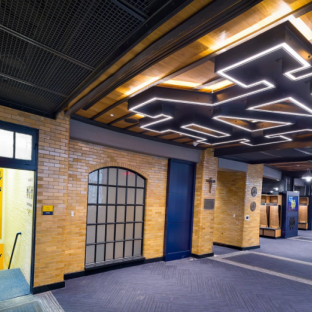 From North Carolina’s Jumpman-themed digs to Texas’s impressive player stalls, 2017 has seen some impressive locker room renovations, and now we can add Notre Dame’s football locker room to the list.

The Irish, who are also sporting a new video board in Notre Dame Stadium, have revamped their locker room just in time for the 2017 season:

The past meets the present in our new game day home.

Take a look at our new Locker Room inside The Stadium.#NDBiggerThanBrick pic.twitter.com/EvbIvSZCU8

Notre Dame, a program steeped in tradition, added plenty of modern touches – metal fixtures, television screens, and new brickwork – while maintaining the locker room’s classic look. It’s a nice blend of the present and the future without forgoing the Irish’s legacy.

“We were not going to change the walk down the stairs or the encounter with the ‘Play Like A Champion Today’ sign,” senior deputy athletics director Missy Conboy explained. “Not a chance.”

But the program also added some nice touches, including a tip of the hat to its greats:

New to the Stadium Tunnel

As you might’ve guessed, the Irish players were big fans of the re-design:

“When I’m making crazy plays they’ll be able to replay it on these screens!”

Notre Dame opens its season on Saturday, September 2 at 3:30 p.m. ET with a home game against Temple.