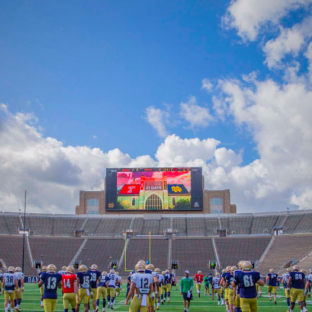 Notre Dame football: Behind the scenes of the Irish's brand new video board

SOUTH BEND — Mike Bonner saw his future inside a booth at Yankee Stadium.

For one night only, it rolled replays and pumped out highlights for an equally identifiable athletic monogram:

A little more than a year and a half after the new Yankee Stadium was unveiled, and barely four months after the team’s larger-than-life owner and managing partner, George Steinbrenner, passed away, the Yankees welcomed Notre Dame to The Bronx for a game against Army on Nov. 20, 2010.

“Before he passed, Mr. Steinbrenner loved college football,” said Bonner, who operated the Yankees’ video board from 1999 to 2013. “He always said, ‘When we do college football here at the new Yankee Stadium, we want it to be great. It’s not just some other event. Let’s make this marquee.’ “

For Bonner, “marquee” meant flying to South Bend for a game — in this case, an underwhelming 28-27 loss to Tulsa on Oct. 30, 2010 — to better understand the program and culture he was preparing to represent. It meant embedding a camera with the team in the week leading up to the Army game. It meant producing a high-quality pregame show to roll in the minutes before kickoff.

It meant proving that a national brand can embrace technology without trampling its rich tradition.

“(Notre Dame’s administrators) said, ‘We think this is an appropriate brand and stadium to show to some folks that we can do it, and it doesn’t have to be over the top,’ ” Bonner recalled.

In the end, the Irish — and Bonner — won in more ways than one.

“After the game,” Bonner said, “(associate athletic director) Jim Fraleigh told me, ‘You might have just helped us get a video board.’ “

Nearly seven years later, the video board is here.

“Compared to many boards of similar size, Notre Dame has as much as four times the resolution of what many college and professional football programs are using,” said Chris Mascatello, the executive vice president of technology solutions for ANC Sports Enterprises, which manufactured the video board.

That investment in picture quality supports the video board’s primary purpose. There are no advertisements. No commercials. No logos of local food chains draped distractingly over the screen.

The emphasis was placed on video — namely, the instant replays that have eluded frustrated fans for many years.

“One of the things that was different about the university compared to others was that this is not an advertising vehicle, unlike pretty much every other video display system in college or professional sports,” Mascatello said. “So the real target was video. The game presentation is the key, and the desire to bring that crystal clear video experience to Irish fans.

“Very quickly, everybody in the discussion said that the screen needs to be a perfect 16 by 19 aspect ratio, just like your flat screen at home, so that it basically looks like a giant TV.”

But, when the games start, who’s going to hold the remote control?

“You might have just helped us get a video board,” Fraleigh said.

“If you do, let me know,” Bonner replied on that night inside Yankee Stadium. “I might be interested in running it.”

Nearly six years later, Bonner — who left the Yankees to operate the video board for the Denver Broncos from 2013 to 2016 — arrived at Notre Dame in Sept. 2016 with a set of skills and a title, but without all the tools with which to work.

While construction continued on the prospective Irish video board, Bonner watched games from the bleachers — all the while scribbling notes and scanning his new surroundings.

“I listened to people while I was sitting there,” said Bonner, 44, the executive producer of live events for Fighting Irish Media. “A play would happen on the field and I would go like this,” he said, craning his neck to the right, “and you couldn’t see a replay because you didn’t have it.

Watch as the Irish see their new locker room for the first time. #GoIrish pic.twitter.com/TZHF3U3Rj2

Bonner’s vision, however, can’t be translated to video without a team. In the season opener on Sept. 2, Notre Dame will have roughly 40 people working together behind the scenes. There will be camera operators — nine, to be exact (seven covering the action and two more scanning for reactions from the crowd and marching band). Bonner has 12 more NBC feeds he can use for in-game replays as well.

There will be utilities operators, which drag camera wires along the sideline. There will be shaders, which adjust the picture and color before it appears on the screen. There will be graphics operators for both the video board and the ribbon boards. There will be a public address announcer, a down and distance operator, a clock operator and a DJ.

And then, of course, there’s Bonner — overseeing everything, cueing the band and pulling the strings.

“If you think about a symphony, you have a conductor,” Bonner said. “I need to make sure we’re making pretty music together.”

And, in the same breath, what it won’t.

“It’s what we’ve always done here — the football and the pageantry and the students and all of that. We’re just looking to visually enhance it.”

OK, but what will that look like? Sgt. Tim McCarthy’s heralded safety messages will now be read on the video board by Notre Dame greats such as Jerome Bettis, Tim Brown, Jeff Samardzija, Mike Brey, Craig Counsell and more. There will be in-depth features on current players in a series dubbed “Irish-ography.” There will be highlights from other ND sporting events that take place throughout the week.

There will be replays. Lots and lots of replays.

There will be inevitable bugs and hiccups, but that comes with the territory. Bonner’s challenge — his charge — is to play matchmaker between tradition and technology. It’s to take a symphony of instruments and deliver beautiful music.

It’s not just to turn on the television. The goal is to make it marquee.

This article is written by Mike Vorel from South Bend Tribune, Ind. and was legally licensed via the Tribune Content Agency through the NewsCred publisher network. Please direct all licensing questions to legal@newscred.com.