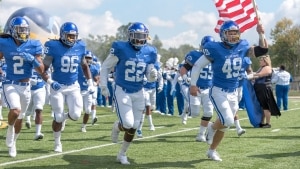 Notre Dame College holds off No. 16 Shepherd for the first upset of the DII football season


The first upset of the DII football season is in the books. Despite a 517 yard passing day by freshman quarterback Tyson Bagent and a relentless 16-point fourth quarter comeback, Notre Dame College was able to hold off No. 16 Shepherd 35-33 behind freshman running back Jaleel McLaughlin’s 302-yard day.

Both of these teams entered the 2018 season with new faces under center. Redshirt-freshman Chris Brimm was replacing Malik Grove for NDC, while freshman Tyson Bagent had the daunting task of replacing Shepherd’s Conner Jessop at quarterback. By game’s end, Bagent would stuff the stat sheet, but Brimm would walk away the winner.

The first half was a back-and-forth battle. The Falcons struck first, but the teams entered the half in a close 14-10 battle in favor of Notre Dame (OH). Thanks to two turnovers created by the Falcons defense, the upset alert was on, as Notre Dame exploded for a 21-7 third quarter, giving them a 35-17 that carried well into the fourth quarter.

Armed with one of the most dangerous wide receiver duos in DII football, Bagent began the torrid Shepherd comeback. The Rams scored 16 unanswered points as Bagent and his receivers, Wayna Allen and Ryan Feiss, had themselves a day. The Rams day came to an end when the Falcons stuffed a two-point conversion in the waning seconds of the game, leaving Shepherd on the wrong side of a thrilling 35-33 opener.

Bagent threw for an incredible 518 yards, second-most in Mountain East Conference history,  and three touchdowns in his Shepherd debut, while Feiss reeled in 172 yards and Allen 165, with each of his elite receivers scoring a big touchdown. While Brimm looked strong in his debut at quarterback for Notre Dame (OH) with two touchdowns and no interceptions, the story was McLaughlin who ran for 302 yards, the third highest single-game total in MEC history, and two touchdowns. Two nearly historic days by freshmen. That’s quite the way to kick off the MEC season.

Shepherd has a week off before it looks to get back on track September 15 as the Rams open their home schedule against Glenville State. Notre Dame travels to Glenville State next weekend, looking to extend its undefeated start.