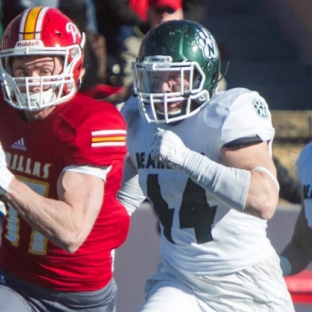 This marks the third time Pitt State has upset a No. 1 ranked Northwest Missouri team since the 2011 season. The Bearcats are 84-9 since the start of the 2011 season with four of those nine losses coming to the Gorillas.

Pitt State erased a 7-0 deficit with 17 unanswered points Saturday. Northwest cashed in on a short field to take a 7-0 lead four plays after the Gorillas failed to convert a fourth down pass on a fake punt at their own 35 yard line. Zach Martin completed the Bearcats scoring drive with a 24-yard touchdown pass to Shane Williams with 5:48 remaining in the first quarter.

The Gorillas countered with a five-play, 48-yard drive to tie the score at 7-7. Thomas LePage, starting in place of injured quarterback John Roderique, fired a 20-yard touchdown pass to Austin Panko for the scoring strike at the 12:51 mark of the second period.

Three plays later, Josh Hornback grabbed the first of our interceptions by a Pitt State defender to set up the Gorillas offense. LePage, who improved to 3-0 on the season as the Gorillas’ starter, then tossed a 32-yard touchdown pass to Lorenzo West to put Pitt State in front, 14-7, with 10:19 remaining in the second quarter.

Jared Vincent capped the first-half scoring with a 33-yard field goal with 4:35 to play in the first half. Vincent’s field goal capped a nine-play drive by a Pitt State offense that managed a season-high 136 rushing yards against the No. 1 ranked defense in NCAA Division II. The Bearcats entered the game allowing just 39.7 rushing yards.

Northwest chipped back into the game with a 40-yard field goal by Brett Garner with 11:00 remaining in the third quarter. After that score, the Pitt State defense forced three straight turnovers – two interceptions and a fumble. The Bearcats then punted, fumbled and were held on downs on their final three offensive series.

The Gorillas limited Northwest to 265 yards of total offense and just 78 net rushing yards on 28 attempts.

Martin completed just 16 of 41 passes for 187 yards in the contest with four interceptions.