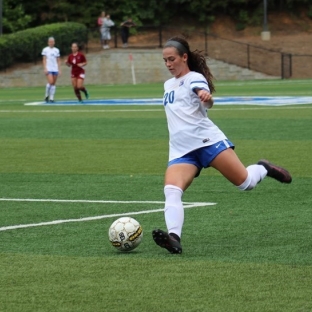 COLUMBUS, Ga. – Behind a three-goal team performance and a four-save effort by Hannah Goudy, the University of North Georgia women’s soccer team upset the No. 2 Columbus State Cougars, 3-2, Wednesday night at CSU’s Walden Soccer Complex. The Nighthawks improve to 4-1-2 and 2-0-0 in Peach Belt Conference play.

The scoring started early for both teams. Renee VanHorn headed home a goal just over 90 seconds into the match, but the Cougars answered with a goal in the fifth minute to tie the match, 1-1.

We you, Renee!! Congrats on being selected this week’s @SteaknShake Nighthawk of the Week!! #HawkEm pic.twitter.com/KovzNR7esW

North Georgia retook the lead in the 29th minute when VanHorn found Taylor Malasek for a left-footed shot that went inside the post. The Nighthawks doubled their lead in the 62nd minute as Rosie Embley put home a shot from 25 yards out to put UNG up, 3-1.

The Cougars pushed forward and found a goal in the 89th minute, but Goudy and the back line for UNG stood strong late to preserve the win.

Check out the highlights from tonight’s 3-2 win over Columbus State! #HawkedEm pic.twitter.com/Vjy7PSdnhI

– North Georgia snaps a eight-match losing streak to the Cougars with the win. The win also breaks CSU’s nation-leading streak of 34 consecutive unbeaten matches at the Walden Soccer Complex that dated back to the last time UNG beat the Cougars in 2013.

– UNG took just 10 shots, but eight of those shots were on goal.

The Nighthawks return home to take on Francis Marion on Soccer Anniversary Night. Saturday’s kickoff is set for 5 p.m. at the UNG Soccer Complex.