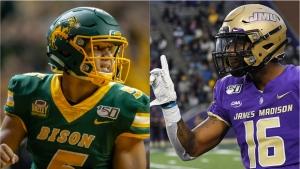 
No. 1 North Dakota State faces No. 2 James Madison for the 2019-20 FCS national championship this Saturday, Jan. 11, in Frisco, Texas at Toyota Stadium. It’s the second time in three years the two programs will meet with a title on the line.

Saturday’s national championship game is set for noon ET and will be televised on ABC and online at WatchESPN. NCAA.com will also provide live updates throughout the game here.

North Dakota State and James Madison will meet head-to-head for just the fourth time ever in Saturday’s game. But it will be the third face-off in the past four FCS playoffs. North Dakota State leads the overall series 2-1.

Below are the stats and summaries from each of the two programs’ previous matchups, which have all come in the FCS tournament.

Dec. 3, 2011: The first meeting between the programs came in the 2011 FCS second round, with No. 2 North Dakota State defeating James Madison 26-14. All three NDSU touchdowns came on the ground, as Sam Ojuri (61 yards) scored twice and DJ McNorton (154 yards) once. This win would be the first step toward the Bison’s first of seven national championship runs.

Jan. 6, 2018: The Bison took back their crown a year later with a 17-13 national championship game victory over the top-seeded Dukes in Frisco. NDSU quarterback Easton Stick was named the game’s Most Outstanding Player with a 13-of-22 day for 130 yards and a touchdown pass.

SHOP FOR GEAR AHEAD OF THE CHAMPIONSHIP: North Dakota State | James Madison