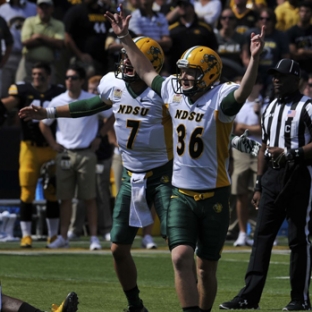 The tremble of anticipation lines the streets of a football city to which no place can compare. The game may be five hours away, but electricity and passion rings through the ears of eager fans. An atmosphere where passion for college football stretches far beyond the population of 120,000. One team. One dynasty. One City. Fargo, North Dakota.

Sitting as a twin city to Moorhead, Minnesota, Fargo is the most populous city of North Dakota, doubling in size over the past 40 years. As the city’s population has increased, so has the annual enrollment to the school housing a college football powerhouse: North Dakota State University.

The North Dakota State Bison fielded their first football squad in 1894. Back then, the college’s mascot was the farmers, but saw the transition to the Bison in the 1920s. The Bison’s reign began in Division II, where they won 8 national championships with an overall record of 347-94-4. With success comes the next step: All North Dakota State athletic teams moved to Division I in 2004. The Bison began as a member of the Great West Football Conference, but currently sit atop the Missouri Valley Football Conference.

Packed with 20,000 fans stained green and gold is The Fargodome, and its nearly impossible to find a stadium where the passion for college football runs deeper. Since the Bison stepped foot in the opponent-dreaded Fargodome, they have rewritten the definition of home field advantage. Sitting pretty at 139-24 through 25 years; their number of wins nearly emulates the number of decibels constantly thundering through their dome.

But the passion reaches far beyond the walls of 1800 University Dr. N. The work ethic and toughness the nation watches from couches on Saturday afternoon begins with the work ethic and toughness the city of Fargo has built and prides itself on. Whether trucking through a dusty soybean field or packing Broadway Street for ESPN’s pre-game show College GameDay, Fargo connects real-world to football and turns hard work into championships.

Fans in Fargo make Saturday’s unique. Former GameDay reporter Samantha Ponder said she “didn’t realize what that team (NDSU) and school was in that community” and said experiencing a Saturday in Fargo is “a night I will never forget.” The passion that fills the streets only increases in the dome — these fans fuel an adrenaline unlike anywhere else.

The Bison have seen 14 players drafted into the professional arena over the past 30 years and have seven on current NFL rosters. Their most recent draftee and only first rounder is Eagles’ quarterback Carson Wentz. Wentz led North Dakota State to National Championships in 2014 and 2015 and changed the stereotype of FCS football after beating FBS-foe No. 13 Iowa and later getting drafted 2nd overall in 2016. Through a year and a half, he has proven his worth as the No. 2 overall pick and has entered the conversation for NFL MVP. Wentz has translated the tradition of Bison football to the NFL and proved to the world what the city of Fargo has made him: A winner.

NDSU is the only unbeaten team in @ValleyFootball heading into another big home game next week with second-place Northern Iowa. pic.twitter.com/2M6jKtiG7M

This year’s squad has outscored opponents 309-67 through seven games. Their potent offense is led by running back Lance Dunn and quarterback Easton Stick—both juniors, along with senior receiver RJ Urzendowski who already has 6 touchdown catches. Led by senior linebacker Nick DeLuca who tops the team in tackles in just 5 games, the defense has far exceeded any expectations. They are allowing on average only 190 total yards per game. In the two shutouts the defense has posted, North Dakota State won by 56 and 52. The Bison have scored more points off turnovers than opponents have total points.

The fans have packed the Fargodome to capacity and watched their Bison win by 160 points through just four home games. A number that seems absurd, but can’t even compare to a couple of the current success streaks the Bison encompass. 93 consecutive weeks ranked in the FCS top-10, seven consecutive playoff appearances and six straight wins against FBS competition.

Not many words are needed to justify what North Dakota State has done since joining the FCS: Win. Inside the Fargodome or not, the vast love of football in Fargo, North Dakota reigns throughout all parts of town.

Hard work and toughness. Two attributes that have turned an everyday city into a household name for a nation full of college football aficionados.

Expectations? Higher than ever with this fan base, but the Bison have proved no expectation is high enough.

Anticipation of another deep playoff run? Much like the anticipation that lines the streets 5 hours from kickoff.

One sport. One team. One dynasty.