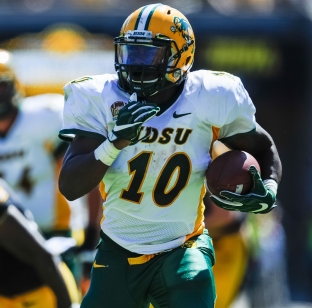 North Dakota State running back Lance Dunn had the Midas touch Saturday afternoon. Every time he touched the football, the Bison scored a touchdown.

Dunn had just three carries on the day for NDSU, rusulting in three rushing touchdowns on 111 yards. That’s an average of 37 yards per carry. His lone reception resulted in a 10-yard touchdown as NDSU cruised to an easy 56-0 victory against Robert Morris at the Fargodome.

Lance Dunn had four touches and found the endzone EVERY. SINGLE. TIME. pic.twitter.com/Ow6Tq50ZLS

The 5-9, 211-pound junior running back opened the Bison’s scoring on their third play from scrimmage when he broke open a 61-yard touchdown run untouched.

Later in the first quarter following a Colonials fumble, Dunn punched it in from five yards out to give NDSU a 14-0 lead.

Dunn’s reception at the end of the first capped off an impressive opening quarter as the Bison led 35-0 after the opening 15 minutes.

His 3rd TD of the 1st quarter today & his 8th TD this season. pic.twitter.com/OvT8YNsajC

MORE: Dayton’s 41-year-old streak | Why it’s all about the run in the FCS

On his final carry of the day, similar to his first, Dunn outran the Robert Morris defense for a 45-yard touchdown to give NDSU a 49-0 lead.

There may be players who put up more overall numbers this weekend, but none will be as efficient as Dunn.