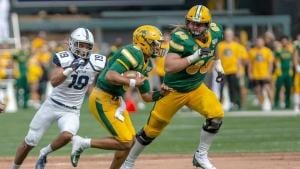 
North Dakota State won an FCS-record seventh national championship in 2018. The Bison aim for No. 8 this year, holding onto the No. 1 spot in the FCS Coaches Poll for the first four weeks of 2019.

Here is the complete 2019 schedule for North Dakota State football, including final results as well as times and TV information for all future games.

You can find and purchase tickets for 2019 North Dakota State football games here, via GoBison.com.

Here was every result from the Bison’s 2018 schedule:

North Dakota State did lose quite a bit of playmakers from last year, returning just seven starters from the 2018 national championship team. Among the departures were three-time national champion Easton Stick, the all-time winningest quarterback in FCS history.

Here are three star Bison who will be back in 2019:

TY BROOKS: Brooks entered 2019 as the leading returning rusher with 737 rushing yards and five touchdowns in 2018. He had two 100-plus yard games as a junior, including a 103-yard, one-touchdown day against Montana State in the second round of FCS playoffs. Brooks is part of a deep running back group also including redshirt freshman Saybein Clark and junior Adam Cofield.

JABRIL COX: Cox is an imposing force in the Bison’s front seven, finishing with 9.5 tackles for loss, four sacks, four interceptions and a team-high 91 total tackles in 2018. The junior linebacker was named an AP second-team All-American and finished fourth in the Buck Buchanan Award race last year. He was named to the 2019 Buck Buchanan Award preseason watch list.

JAMES HENDRICKS: Hendricks finished with five interceptions and a team-best 14 passes defended last year at safety. He picked off two passes in the 2018 FCS playoffs, including one in the national championship game against Eastern Washington.

North Dakota State was voted No. 1 in both the FCS Coaches and the STATS FCS Top 25 preseason polls. Both polls are updated weekly.

The 2020 FCS championship game is scheduled for Jan. 11, 2020. It will be the 10th straight year the national title game will be played in Frisco, Texas.

The road to Frisco gets started on Nov. 24 with the 2019 NCAA Division I Football Championship selection show, announcing the 24 playoff qualifiers. The FCS playoffs begin Nov. 30 with the first round. Click or tap here for the full championship schedule.

Here is the complete FCS championship history since 1978. North Dakota State has won two straight titles and seven of the last eight.