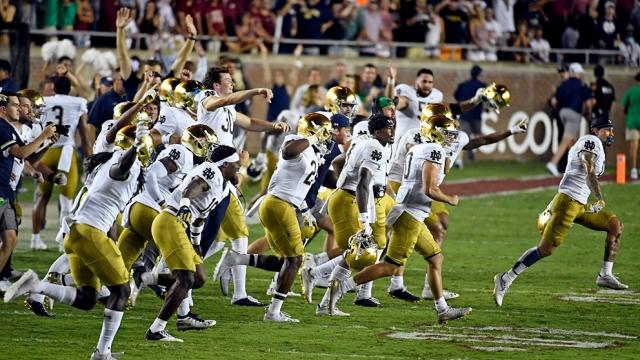 When Florida State quarterback McKenzie Milton brought the Seminoles back from a 10-point deficit in the final nine minutes of the fourth quarter in his first game in nearly three years, it felt like the momentum on that side of the field was strong enough to hand Florida State the victory.

That momentum came to a screeching halt in overtime.

Florida State got the ball first in the extra frame and after three failed attempts at getting another first down, Ryan Fitzgerald missed a 37-yard field goal attempt.

When the Fighting Irish took over, the only difference on its drive was Jonathan Doerer, its kicker, who converted from 41 yards away and No. 9 Notre Dame ended any chances of a Florida State upset with a 41-38 win in Tallahassee.

Even in defeat, however, Milton’s return to the gridiron was magical.

The former UCF quarterback suffered a gruesome knee injury on Nov. 23, 2018, and Saturday night was the first time he’d received a snap in a game since then. Just him being able to walk, run and eventually find his way back onto a football field was incredible enough. Willing the Seminoles back from a 10-point deficit paled in comparison to his prior three years.

After almost three years away from football because of a devastating leg injury, he passes for a first down in his first play and goes 4-for-4 in a TD drive. pic.twitter.com/G8A2ipCNd7

Milton only entered the game after QB Jordan Travis lost his helmet from a hit. His first play was a 22-yard dart to Ja’Khi Douglas on 2nd-and-10. He finished 4-for-4 on that drive, leading the Seminoles to a touchdown to make it 38-35.

After a three-and-out by Notre Dame, Milton once again took the field, this time getting Florida State a field goal to tie the game with 40 seconds left.

RECAP: 6 things to know from Week 1 of the college football season

Milton finished the night 5-for-7 for 48 yards. Travis, the football hurler he replaced, went 9-for-19, 130 yards, two touchdowns and three interceptions.

On the other side of the field, senior grad transfer Jack Coan played the part of veteran, going 26-for-35, 366 yards, four touchdowns and one interception. That one interception came on the final play of the game after heaving one towards the end zone.

Notre Dame tight end Michael Mayer led the Fighting Irish with nine receptions for 120 yards and a touchdown. Florida State’s top offensive player came in the form of running back Jashaun Corbin, who posted 15 attempts for 144 yards and a touchdown. His top highlight of the night came on an 89-yard touchdown run in the first quarter.

UNBREAKABLE: Here are 7 college football records we think will never be broken

It’s only Week 1, but Sunday night’s thriller in Tallahassee is a safe bet to be a “Game of the Year” nominee at season’s close.

And oh, yeah. Milton’s return to action will be a “Story of the Year” nominee, too.