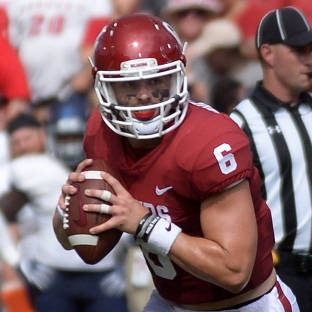 No. 5 Oklahoma looks for revenge at No. 2 Ohio State Saturday night

COLUMBUS, Ohio — Oklahoma quarterback Baker Mayfield clearly recalls the blowout in Norman when Ohio State came to town a year ago. The young Buckeyes dominated, quieting the home crowd in a 45-24 thumping of the Sooners.

Oklahoma didn’t lose a game after that, reeling off 11 straight victories. On Saturday night the No. 5 Sooners visit Columbus to face No. 2 Ohio State. While Mayfield and his teammates downplay the revenge factor, they haven’t forgotten the humiliation of last year’s meeting. They remember the “embarrassing” spectacle of Buckeyes players singing the Ohio State school song on their turf.

“Everybody who was here for last year’s huge loss definitely remembers that,” he said.

Mayfield, who threw two interceptions, accepted much of the blame.

“I think it was a huge learning curve for me, losing that game and watching the film and realizing I didn’t play well at all,” he said. “Yeah, we had some good plays and we wound up scoring 20-plus points on a good team. But obviously we didn’t get the outcome we wanted, and a huge part of that was on me.”

Offensive tackle Orlando Brown said the team is trying to keep the focus on this year’s game, but the distasteful memory lingers.

“As far as last year, there are certain things that do stick with us,” he said. “But right now, we’re really focused on this year’s record and doing what we have to do to go win every week and go undefeated, if that’s possible.”

Here are some other things to watch Saturday night:

Offensively, Oklahoma is not the same team, despite the rock solid presence of Mayfield and Brown. Thousand-yard rushers Joe Mixon and Samaje Perrine are gone, as is Mayfield’s favorite target, Dede Westbrook, who accounted for 1,524 receiving yards and 17 touchdowns last year.

Abdul Adams leads a group of young running backs who will try to pick up the slack, and tight end Mark Andrews hauled in seven passes for 134 yards and a touchdown against UTEP last week. He’s going to catch a ton of Mayfield passes this year.

On Ohio State’s side, quarterback J.T. Barrett’s top three receivers in last year’s Oklahoma game have moved on, including Noah Brown, who caught four TD passes against the Sooners.

Weber was slowed by a hamstring injury throughout preseason camp. Meyer said Weber could have played in the opener against Indiana, but his presence wasn’t required as Dobbins staged his coming-out party by rushing for 182 yards on 29 carries.

The questions are how Meyer will handle the rotation and whether Weber will have extra motivation to show that he deserves the job.

Meyer said he’s glad Ohio State started the season with a tougher test last week on the road against Indiana instead of the usual opening-day blowout against an overmatched team. That should pay dividends in Saturday’s much more challenging matchup with Oklahoma, he said.

The Buckeyes’ offense started slow against the Hoosiers, trailed 14-13 at halftime and didn’t get on track until midway through the third quarter. The defense in the first half had trouble covering Indiana’s receivers until clamping down later in the game, which the Buckeyes won 49-21.

“I think to beat a team 70-0 right now is not what we need,” Meyer said afterward. Oklahoma, meanwhile, was barely tested in a 56-7 home win over UTEP .