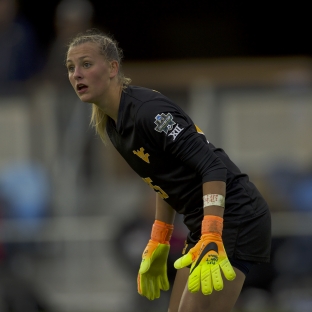 “It boils the blood,” she said.

Georgetown’s Grace Damaska fired a shot off the crossbar that eluded the Cambridge, Ontario, native and fell into the right corner of the net.

The No. 9 Hoyas rejoiced after handing the Mountaineers a setback in their second game as the nation’s No. 1-ranked team, on Sept. 18, 2016, at Dick Dlesk Soccer Stadium.

That 1-0 double-overtime defeat would be WVU’s last until USC’s 3-1 triumph in the Dec. 4 national title game.

After the Mountaineers’ loss to Georgetown, backup goalkeeper Michelle Newhouse walked a disconsolate Foster off the field with an arm wrapped around her shoulder.

Hear what coach Nikki Izzo-Brown had to say about her team’s intensity today in a 3-1 win vs. Bowling Green! pic.twitter.com/bOvvKykNtd

Foster’s opportunity for redemption is nearly here. The top-ranked Mountaineers open the season at 4 p.m. ET Friday at No. 5 Georgetown.

“It’s a great challenge to start off with,” Foster said. “For me, it’s going to be a comeback. I want that game more than anything.

“That goal I look back to every single time. It was one of my only goals of the season. Looking back on it, I definitely want to take Georgetown on as a way to start the season off strong and base my sophomore year on that.”

Her debut collegiate season was spectacular, despite missing chunks of the season to play for her U-20 Canadian women’s national team.

Foster, who expects to be with WVU for the entire 2017 season, allowed only seven goals in 17 matches, registering a 0.42 goals-against average, the best mark in program annals.

She collected 36 saves and contributed to eight shutouts. Foster earned a berth on the all-Big 12 Conference second team and the all-Big 12 freshman squad.

“Last year coming in as a freshman and having to do what she did just speaks volumes of what type of kid she is,” said WVU coach Nikki Izzo-Brown, alluding to Foster splitting time between WVU and her national team. “I give her a lot of credit for what she was able to manage. Asking a freshman to do that is a whole lot.

“She’s always developing for her ultimate goal, and that’s to be women’s national goalkeeper for Canada. In the meantime, it’s going to be really awesome to have her just focused on West Virginia soccer.”

Foster acknowledges that 2016 was a year she’ll cherish, even though it taxed her mentally and physically.

“It was an experience, to say the least,” she said. “I enjoyed it actually to experience the best of both worlds playing Division I soccer — aggressive and fast-paced — and then going back home and playing for the country and getting that international experience with a lot of skill and star players you have to play against.

MORE: 10 must-see games that kick off the season

“That part was awesome. The managing of time was a learning experience as well. I think it helped me better in the spring as I learned how to manage my time with academics and everything and manage my time with the team and then leaving them and having them trust me when I came back and trusting my teammates as well to support me while I’m away. It was definitely a learning experience, and I appreciated everything about it.”

“We grew to create a great connection off the field as well. We would go for breakfast all the time and just chit chat. I think that was what helped me get accustomed to the back line.”

The votes are in and @wvuwomenssoccer was chosen to win the @Big12Conference in the preseason poll!

See where everyone else stacked up: pic.twitter.com/2GPVb2etuI

Foster will be counted on to lead the back line this season in Buchanan’s absence.

“It’s definitely going to be a big role for me to take on to organize the back line more because we won’t have ‘Keish,’ who used to literally construct the back line,” Foster said.

“I’m going to have to take on her role, and it’s an honor. It’s a challenge, and I want to take on that challenge with all my might and use it to my advantage.”

This article is from The Dominion Post, Morgantown, W.Va. and was legally licensed via the Tribune Content Agency through the NewsCred publisher network. Please direct all licensing questions to legal@newscred.com.