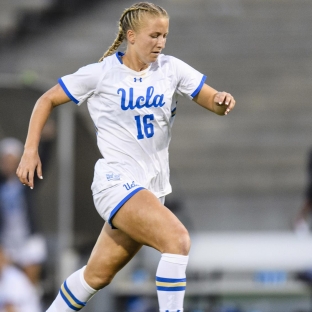 The women’s soccer season is back and in full swing. Six different teams received a first-place vote in the latest United Soccer Coaches poll and nine teams in the top 25 have already suffered a loss.

RELATED: No. 6 West Virginia holds off No. 4 Penn State for 2-1 victory

We’re back with the best goals from Week 2 of the women’s soccer season, featuring game-winners, upsets and overtime goals.

Hailie Mace’s left-footed strike in the 16th minute was the only goal of the game as UCLA defeated BYU. The Bruins improved to 5-0 with the win.

First goal of the night..#UCLA goal by #16 Hailie Mace. pic.twitter.com/vH8BTNfKZu

Scoring a trick is good, but doing so in just the first half is #Pac12Soccer Offensive Player of the Week worthy! https://t.co/7VXZCDgvUg pic.twitter.com/bw2CP8bLyZ

North Carolina ran past Auburn 5-0 and Alessia Russo started the scoring with a blast from almost 30 yards out that found the upper-90.

Alessia Russo BURIES this one into the upper 90 to help take down the Tigers pic.twitter.com/kN1H7b0YKK

West Virginia handled No. 4 Penn State 2-1 after jumping out to a two-goal lead in the first half. Sh’Nia Gordon finished off a beautiful cross from Hannah Abraham with her left foot for the game’s first goal, then Lauren Segalla chipped a shot over the Penn State goalkeeper’s head later in the half.

The Huskies pulled off a huge upset of No. 2 Florida after Shannon Simon’s goal in the 2nd minute of action. Washington held on for the win.

Check out the highlights from tonight’s big win over #2 Florida. #GoHuskies pic.twitter.com/8lSx1AQrdY

Clemson defeated VCU 1-0 on Friday after Jeni Erickson headed in the game-winner off of an assist from Dani Antieau.

South Carolina won a pair of games at the Notre Dame Invitational, and the Gamecocks kicked off their weekend with a 1-0 win over the Fighting Irish in double overtime. Freshman forward Ryan Gareis scored the game-winner in the 102nd minute.

The Gators started the season 4-0 for the first time since 2010 thanks to a 2-1 victory against Syracuse. Parker Roberts scored the game-winner in the 57th minute with a well-placed shot just inside the right post. You can watch the play below beginning at the 0:45 mark.

– to start the season after a – win over Syracuse!

Here are all the highlights from the win tonight! #GoGators #TheGatorWay pic.twitter.com/mPlSV5gwrL

Stanford ran away from No. 10 Georgetown 4-0 and Kyra Carusa put the finishing touch on the win with her goal in the 78th minute – her fourth of the season.