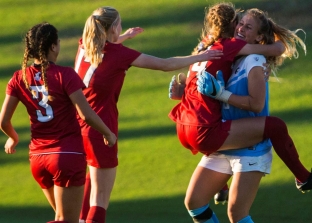 NCAA women's soccer: Washington State advances to Round of 16 for first time on PKs vs. Tennessee

GAINESVILLE, Fla. – For the first time in Washington State women’s soccer history, the Cougs (10-7-4) pushed their way into the third round of the DI championship after advancing past No. 20 Tennessee (15-4-2) on penalty kicks 3-1 Friday afternoon in the Florida regional.

The Cougs dominated the shootout thanks to three huge saves from Ella Dederick, as the redshirt junior denied three straight Volunteer attempts. On the other end, Maegan O’Neill, Sofia Anker-Kofoed and Jordan Branch all calmly slotted home their attempts from the spot.

The shootout victory would not have been possible without the late-game heroics from senior Kelsee Crenshaw. The outside back helped staved off elimination with a long-range bomb in the 79th minuted to even the game at 2-2. Crenshaw’s rocket from deep was necessary after Tennessee took a 2-1 lead into the locker room thanks to a pair of goals Danielle Marcano. Marcano’s strikes put the Vols ahead after WSU opened the scoring in the 13th minute on sophomore Morgan Weaver’s first postseason goal on the Cougs’ first shot of the day.

Check out highlights from Washington State’s win over Tennessee in #NCAASoccer second round action. pic.twitter.com/dwmm63ba8j

Coach’s quote of the match

“What a game. Cougs advance into the Round of 16 off of a 2-2 tie that goes into penalty kicks. What a performance from our goalkeeper over here, Ella, and the three young ladies who took the shots to close the deal…Here’s this little old team from Washington State, Pullman, Washington that comes to Orlando and beats an unbelievable UCF team, knocks them out. Then comes down here and plays a fantastic Tennessee team. When we packed two weeks ago I told the team we’re coming here to win and we’re coming here to stay. Pack your bags and we’re going to go out on this journey.”

Things you need to know