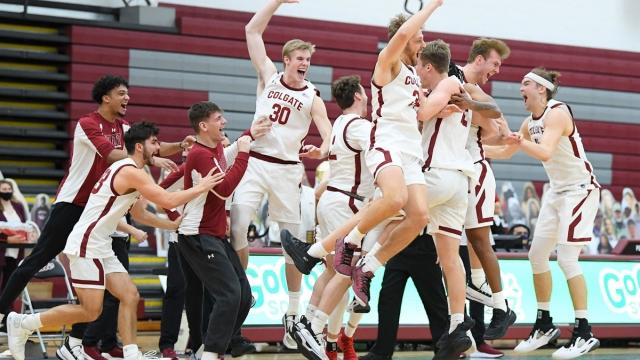 If you want to keep your bracket perfect for as long as possible, you’re going to need to correctly find some first-round upsets.

There are years were that means finding the right No. 12 seed in the ever-popular No. 12 vs. No. 5 game. But that sometimes means predicting a No. 13 seed or lower to shock the world.

Here’s how 021 Bracket Challenge Game players tried to predict some of these upsets, based on picks made through mid-morning, on Thursday, March 18.

The most-picked 2021 NCAA tournament upsets, according to the data

This wouldn’t be the first place to expect an upset, though 2018 UMBC proved anything is possible in March Madness.

Not surprisingly, No. 1 overall seed Gonzaga, who’s looking to become the first undefeated champion since Indiana in 1976, claims the highest pick percentage of this group. But Michigan is close.

When it comes to those choosing upsets out of the No. 16 seeds, Drexel leads the pack. The 12-7 Dragons won the CAA tournament by defeating College of Charleston, Northeastern and Elon. It’s their first NCAA tournament appearance since 1996. That year, Drexel upset Memphis as a No. 12 seed. But pulling off another stunner would be even more shocking.

Eight No. 15 seeds have beaten No. 2 seeds, most recently Middle Tennessee against Michigan State in 2016. Of the four here, only Iona is picking up better than 5 percent of BCG picks. Could that be the Rick Pitino effect? He’s in his first season with the Gaels, who are 12-5 and won four games in five days to claim the MAAC bid. Iona is also a familiar name to bracket fillers, as it’s made the NCAA tournament six times since 2012.

Grand Canyon (17-6) is next of the No. 15 seeds, impressive considering this is the Lopes’ first NCAA tournament appearance at the DI level. Center Asbjørn Midtgaard leads the team with 14.0 points and 9.9 rebounds per game while shooting 70 percent. First-year coach Bryce Drew had March magic himself as a player, hitting the famous buzzer beater that lifted No. 13 seed Valparaiso past No. 4 Ole Miss in 1998.

The Raiders make for a difficult situation if you’re Arkansas — at least on paper. Colgate is No. 9 in the NET rankings and played only 15 games, going 14-1, beating Army (3-1), Holy Cross (4-0), Boston U (4-0) multiple times going into the Patriot tournament. Colgate then defeated Boston U for a fifth time in the conference quarterfinals before beating Bucknell and Loyola (Maryland) to win the league crown.

Abilene Christian is a distant second here. The Wildcats’ path to an upset could be found with turnovers. They rank first in the nation in turnover margin at 6.4 — and Texas ranks 240th in coughing up 14.2 turnovers a game, on average.

All but one game here as more than 10 percent, as No. 4 Florida State is performing well with BCG users.

Only one of these is beating No. 14 Colgate’s mark, too: Ohio. Virginia is the defending national champion, but the Cavaliers’ 2018 exit to No. 16 seed UMBC and perhaps it dropping out of the ACC tournament because of COVID-19 positives and contact tracing might be coming into play here. But some of this is also likely because of Ohio. Though the 16-7 Bobcats had a heavy handful of game postponements, they have won nine of 10 since Jan. 23. Leading scorer Jason Preston scored 19, 27 and 22 points in three MAC tournament wins.

If Ohio can take out Virginia, it would be yet another addition to the Bobcats’ post-2010 upsets list. In 2010, they beat Georgetown as a No. 14 seed. Two years later, No. 13 Ohio eliminated Michigan and No. 12 South Florida to reach the Sweet 16.

Share. Twitter Facebook Google+ Pinterest LinkedIn Tumblr Email
Previous Article10 of the best duos to watch out for in the 2021 NCAA women's basketball tournament
Next Article Sister Jean will be in Indy rooting on Loyola Chicago (but picks another team to win it all)