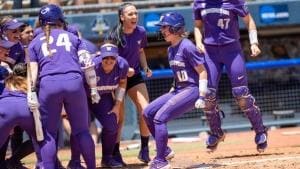 
On Survival Saturday, the No. 3 Washington Huskies lived to fight another day.

Gabbie Plain fanned 10 batters in 6.2 innings of work and the Huskies outlasted the No. 7 Minnesota Gophers, winning 5-3.

The Huskies now move on to face Oklahoma State in Game 9 of the Women’s College World Series, which will be played 45 minutes after Florida vs. Alabama concludes Saturday night.

Here’s how the Huskies won it.

Carlie Brandt smokes a double and scores Emma Burns all the way from first!#WCWS | @GopherSoftball pic.twitter.com/wg3VKgvMkG

There are worse places to spend a weather delay… pic.twitter.com/NdLgb3nAKG

How did you pass the time during the delay? 😂#WCWS pic.twitter.com/t387s29gje

SCHEDULE: Dates and times for the 2019 Women’s College World Series