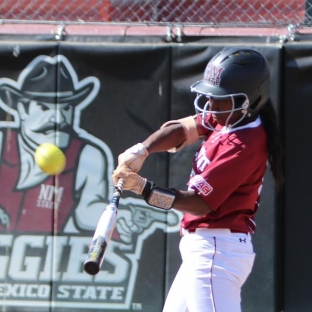 LAS CRUCES — Rachel Rodriguez is a spark for New Mexico State at the top of the Aggies’ lineup.

Rodriguez can use her speed to get on base — by laying down a bunt for a base hit at any time — and use that speed to steal second base to get into scoring position. The junior shortstop from Paramount, Calif., is one of the top base stealers in program history and is second on the NMSU career stolen-bases list with 69 going into Friday’s NCAA Regional matchup at No. 2 seed Arizona. Rodriguez is 34 stolen bases behind Kylie Randall’s program-record 108 stolen bases from 2008-11.

For the season, Rodriguez has 22 stolen bases while hitting .377 with 11 doubles and a .423 on-base percentage. She added a Western Athletic Conference Tournament MVP award to her resume after hitting a walk-off single to give the Aggies a 15-14 win over Seattle to force a second WAC championship game and later had a two-RBI single that gave NMSU a 3-0 lead in the first inning over Seattle in the second conference title game.

“Rachel is a spark in so many ways,” Aggies coach Kathy Rodolph said. “She is like a very, very sweet soul and loved by everybody on the team. She never takes herself too serious, but she always wants to do whatever she can to really come through for the team. Sometimes, you’re talented, but maybe a little bit arrogant. But that’s not Rachel Rodriguez’s way.”

Rodriguez followed in her sister’s footsteps to Las Cruces. Her older sister, Staci Rodriguez, was also a standout player for the Aggies and was a two-time WAC Player of the Year.

“I started out as a freshman with my sister here and we’re very different players,” Rachel Rodriguez said. “She was a power hitter, I was speed and I had to use that to my advantage if I wanted to be on the field. I just have to work hard every day and I thank my strength coaches all the time that they keep getting me stronger and faster and faster. I have to use that every day, day in and day out.”

At first, Rachel did not want to play with her sister. But became familiar with NMSU on visits and when it came time to decide where to play college softball, Rachel said she couldn’t imagine herself being anywhere else.

Staci is now a graduate assistant on Rodolph’s coaching staff and Rachel said her sister his her biggest critic, but also her biggest fan.

“It literally brought tears to my eyes to see (Rachel win WAC Tournament MVP) because I know she has worked so hard and I’m so glad she was able to continue this all throughout the season,” Staci added.

“She mentored me, showing me the ropes,” Rachel said. “And I can’t thank her enough. … She’s not afraid to tell me like it is, she’s my biggest supporter and she helps me with whatever.”

Rachel’s speed and leadership will be key for the Aggies this weekend. NMSU has the second youngest team in the nation, and Rachel is one of the few members of this year’s Aggie team that has played in a NCAA Regional.

“I think my leadership and experience is going to be very important,” Rachel said. “Just keep everyone focused on our mission and not let anything get too big just because it is regionals. Arizona is a very good team. We just have to stay focused on what’s going on and give them our best game.”

This article is written by Mark Rudi from Las Cruces Sun-News, N.M. and was legally licensed via the Tribune Content Agency through the NewsCred publisher network. Please direct all licensing questions to legal@newscred.com.