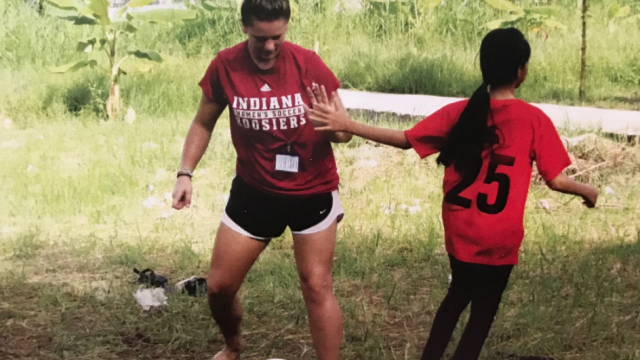 BLOOMINGTON, Ind. – Many don’t fully grasp the advantages of being from a country like the United States.

Imagine having to bike two hours round-trip over a hilly, jarring terrain just to go to school. Imagine having parents that may discourage you from actually going, and would rather have you stay home and work.

For a month this summer, rising sophomore goalkeeper Sarah L’Hommedieu was able to experience the different ways of life as she traveled to the Mekong Delta, the southern-most region of Vietnam.

L’Hommedieu went on the trip through the program Coach for College. Coach for College is a service-learning program that brings together U.S. student-athletes and Vietnamese students to teach academics, sports, and life skills at summer camps to disadvantaged children in rural Vietnam.  Most of the kids were anywhere from 10-14-years-old.

“Essentially in Vietnam education isn’t a right, it’s not even encouraged in some places, especially the place we were in. What the program tries to do is teach higher education through sports. So we would teach a subject for a period of about an hour and then we would teach a sport for an hour. We would do that two times in the morning and two times in the afternoon,” L’Hommedieu said.

Her responsibilities included teaching the kids soccer and English. L’Hommedieu stated that knowing English is basically a prerequisite for college in Vietnam, as many colleges require the kids to comprehend the language.

As one can conceptualize, L’Hommedieu mentioned that there are many differences between the States and Vietnam, but she could recollect on two in particular.

1:  “There’s an intense wanting to learn, but they don’t necessarily have the resources,” L’Hommedieu said. “For example, the school we taught at was in the countryside and there were some kids that would ride their bike an hour to school every day and an hour back home. We taught 6th and 7th graders so this is kind of a big year for them because this is when a lot of kids drop out of school. All these kids wanted to learn so badly but there’s always that underlying tone of ‘are my parents going to pull me out of school?’ which actually did happen to one of the kids there. It was just dealing with the fact that that the kids wanted to come to school, but understanding that it just wasn’t a reality for some kids.”

And 2: “They were always happy about everything. They took the littlest things and would make them into positive situations. They had so little but were always willing to give so much,” L’Hommedieu said. “I remember one day a girl came to class without a pen, so I gave her my pen and the next day at school she comes wearing it (the pen) on a necklace. They take the littlest things and find meaning and importance in everything.”

L’Hommedieu explained why some Vietnamese parents take their kids out of schooling.

“Because it’s a third-world country, if you don’t farm, you don’t eat. The parent’s thought can be ‘I’m going to keep financially assisting my child to go to school and it’s not yielding anything in the long run, I’m wasting that money when I could be feeding my kids,'” L’Hommedieu said.

“We did go to one of the parent’s houses and convince them to let one of the children stay in school. It was very eye opening because in the States you expect your parents to want you to go to school and even make you go to school, but it’s just not at all the same thing over there,” L’Hommedieu said.

L’Hommedieu mentioned that she and others participating in the program with her even offered to pay for the kid’s schooling. And how much does schooling cost in Vietnam? $5.

It put things into perspective for L’Hommedieu.

“Everything we have here as student-athletes is a blessing, especially as a woman being able to go to college. It’s not even a possibility for a lot of little girls to even dream about higher education over there, so for me to be playing soccer at a DI University in the Big Ten is mindboggling to them, as it is to me as well,” L’Hommedieu said. “I noticed how incredibly lucky we are to have access to not only education, but world-class education, especially here at Indiana University with so many awesome professors and coaches. I think we take it for granted a lot.”

Of course she had to have a favorite, as a little girl named Chó won over her heart.

“She was so smart and she tried so hard in everything. She came to school one day limping around and she wouldn’t let anyone see why, but she finally let me and on the bottom of her foot there was a giant gash. In Vietnam, that’s kind of common because they don’t wear shoes and the roads aren’t paved.”

“I gave her a piggy back ride to the hospital and the whole time she wouldn’t cry and was being very tough. That’s how all the kids are –  they’re very tough, very positive, and they don’t let anything get them down. It’s all just part of life, and they take it in stride,” L’Hommedieu said.

L’Hommedieu mentioned that she was first a little skeptical to participate in this program, but now after the fact she couldn’t imagine herself not doing something like that again in the near-future. She also gave high praise to the athletic department for making the trip possible.