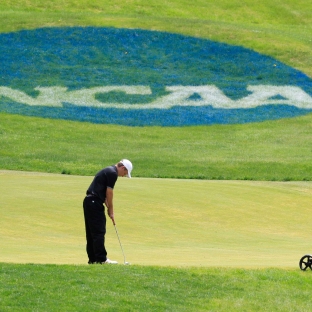 An exciting day three of action from the DIII men’s golf championships saw a new leader take charge. Wittenberg shot a combined 11-over, 299 to take a two-stroke lead over Guilford.

Wittenberg — who shot a round two-best 290 to jump into second place — continued its hot play at the Mission Inn Resort & Club in Howey-in-the-Hills, FL. They were led by Cameron Willis, who shot even to remain at 2-over and in a three-way tie for second place.

UT Tyler made a big push on day three, jumping into the top five behind a round three-best 290. UT Tyler’s Sam Hill shot a 2-under to tie for the individual lead, while his teammate George Toone shot a 1-under to move into a second place tie. Brad Lankler of Franklin & Marshall shot even to tie Hill for the lead.

Huntingdon, who led for the first two days of the tournament, is still very much in the hunt. They dropped to third overall, a mere three strokes off the lead.

One day remains to crown both a team and individual champion. Who will rise to the occasion?

Check back Friday morning for live up-to-the-minute action from the DIII Men’s Golf Championship final round.