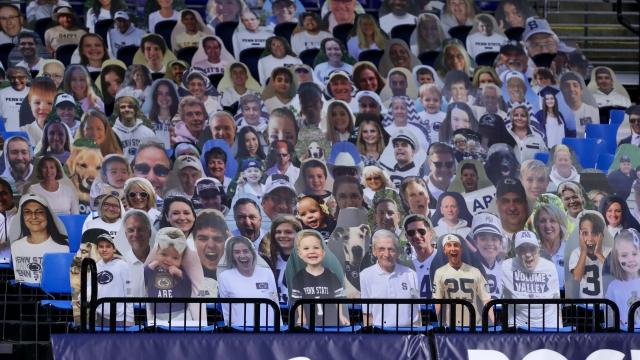 Women’s basketball fans will have the opportunity to be represented at the Women’s Final Four in San Antonio as part of a new fan cutout program that will support several causes. All proceeds from the cutout program will benefit three nonprofits: the Kay Yow Cancer Fund, which awards research grants and funds programs fighting all cancers; the Pat Summitt Foundation, which funds research for treatment and a cure for Alzheimer’s disease while supporting patients and caregivers; and the San Antonio Food Bank, which serves hundreds of thousands of individuals at risk for hunger across southwest Texas.

“This fan cutout initiative provides an opportunity for women’s basketball fans — who have passionately supported the growth of the game — to continue to make an impact during an unprecedented year,” said Lynn Holzman, NCAA vice president of women’s basketball. “While the program will enhance the in-venue experience for participating teams, it will more importantly support causes that are close to the hearts of the women’s basketball and San Antonio communities.”

MORE: Tracking every auto bid to the 2021 women’s NCAA tournament

Cutouts at the Women’s Final Four will be interspersed with limited fan seating available for the games. Earlier this year, the NCAA announced in conjunction with local health officials that tournament venues in San Antonio would host up to 17% capacity with masking and physical distancing of fans.

Cutouts will be featured inside the Alamodome for the Women’s Final Four semifinal games and the national championship game. Sales begin today and conclude Sunday, March 28. Cutouts cost $100 and can be purchased at ncaa.com/womens-final-four. Current college students can purchase cutouts at a discounted rate of $50 with their school email address.

For an additional fee, fans can choose to ship the cutouts home afterward to keep as a memento. Any cutouts that are not purchased will be recycled after the event.

“The Kay Yow Cancer Fund is honored to be a beneficiary of the NCAA’s fan cutouts initiative at the 2021 Women’s Final Four. We continue to be so appreciative of the impact the sport is making in the fight against all cancers affecting women,” said CEO Stephanie Glance. “Coach Yow loved the championship, and she believed in the power of uniting people for a common cause. What better way to show our unity at this time than through a fan-based initiative that will be a visible display of support at the championship.”

MORE: Here are the semifinalists for the Naismith Women’s Player of the Year award

“It is such an honor to be chosen by the NCAA to be featured as one of the three charities of choice for this amazing initiative,” said Joan Cronan, advisory board chair for the Pat Summitt Foundation. “We are grateful to be featured alongside the Kay Yow Cancer Fund and the San Antonio Food Bank. Thank you to the NCAA for supporting our mission to defeat Alzheimer’s and carrying on Coach Summitt’s legacy.”