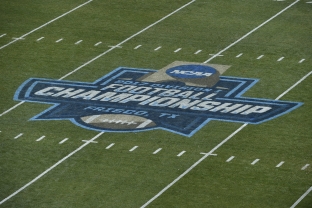 The NCAA Division I Football Championship Committee will reveal the top 10 teams in order twice during November.

The rankings will be announced during the halftime studio show on ESPNU during the following games:

For the second straight year, the November announcements will help build excitement around the Football Championship Subdivision playoffs and may have some bearing on the final bracket that will be revealed at 11 a.m. Eastern time on Selection Sunday, Nov. 19, on ESPNU.

The 2017 championship field consists of 10 automatic qualifiers and 14 at-large qualifiers. The top eight teams will be seeded, receive first-round byes and host second-round games. The 16 other teams will bid to host first-round games, which will take place Saturday, Nov. 25. The national championship game will be at noon Eastern time Saturday, Jan. 6, in Frisco, Texas, and will be broadcast on ESPN2.