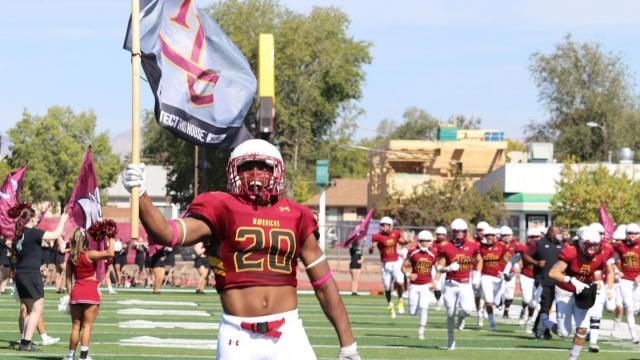 
Another week of Rocky Mountain Athletic Conference football is in the books. A few conferences announced a spring DII football schedule and many DII college basketball teams returned to the court for practices.

Let’s take a look around the world of NCAA DII sports.

It was a stat-filled weekend in DII football. Colorado Mesa had fun in the snow in a 56-7 victory over Black Hills State, while Chadron State took down South Dakota Mines in equally dominating fashion, 41-25.

Colorado Mesa 56, Black Hills State 7
It was a snowy Saturday in Spearfish, SD but the Mavericks looked very comfortable. The 49-point win was their first at Black Hills State since 2014. Jesse Rodriquez had another big week with 158 yards and a touchdown. He’s now averaging 167 yards per game in 2020. Freshman running back D’Aris McMillan made the most of his four carries, scoring three of the Mavericks touchdowns.

Stars of the game:

Chadron State 41, Black Hills State 25
Dalton Holst bounced back with a monster performance against the Hardrockers. The star quarterback threw for 361 yards and two touchdowns. It was the 23rd-straight game with a touchdown pass for Holst who had a pair of receivers pull in more than 150 yards on the day. There were plenty of offensive stars on both sides of the ball in this shootout.

Stars of the game:

Elsewhere, Angelo State took on FCS foe Stephen F. Austin. The Rams kept it close for nearly three quarters before the Lumberjacks ran away with it at the end, winning 31-12.

Both the Great Midwest Athletic Conference and Great Lakes Valley Conference announced they will have abbreviated spring football seasons. They join the South Atlantic Conference in committing to spring games.

That means several teams projected to be in the DII football preseason top 25 will be in action. Nick Watson and JaQuan Hardy are back to lead Tiffin in G-MAC action and will have very tricky Findlay, Ohio Dominican and Hillsdale to contend with, as well as NFL draft prospect Justin Growel on Lake Erie.

The GLVC features a few of the best players and teams in DII football. Indianapolis will be back in action with its exciting backfield of Al McKeller and Tori Clinton expected to suit up for the Greyhounds. Quarterback Cade Brister returns for the Lindenwood Lions, who’s exciting offense was one of the feel good stories of 2019.

Stay tuned. We’ll be sure to update you with any other conferences that decide to join the mix.

While this actually happened earlier in October and not last week, it’s certainly worth mentioning. Twenty DII football student-athletes were named as finalists for the 2020 William V. Campbell Trophy recognizing seniors that are “the absolute best football scholar-athlete in the nation”. There were a record 199 finalists across collegiate football.

Many DII men’s and women’s basketball teams finally took the court this past week as the much-anticipated practice season began. The MIAA will get things rolling the week of Nov. 16 with the official first tip of the season, so let’s continue our look at contenders for the coming season.

DII men’s basketball: West Texas A&M
The first time I saw Joel Murray and Qua Grant was in Evansville, Ind. at the DII men’s basketball championship. I was blown away at how good both were in the DII Men’s Elite Eight… and the duo were only freshmen. They both return for their junior seasons and are arguably the most dynamic and dangerous one-two punch outside of Maryville, Missouri (that’s home to Northwest Missouri State). There is a lot of nice complementary pieces to help, but those two will make big things happen in Canyon, Texas.

DII women’s basketball: Hawaii Pacific
The Sharks were 29-1 when play halted last season, which earned them the No. 3 spot in our final Power 10 of the season. While HPU loses it’s highly-decorated guard Starr Rivera, four of the top five scorers are slated to return. There is plenty of experience back to make the Sharks a big-time threat in 2021.

Angelo State hosted the Blue and Gold Classic —in which several Lone Star Conferences went head-to-head — this past weekend. West Texas A&M took the men’s circuit while DBU’s women won their meet. The meet was a harbinger of things to come.

A LOOK AT 2020: How DII cross country adapted to a season like never before