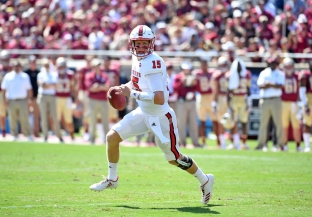 RALEIGH, N.C. — It took North Carolina State just one clunker of an opening-game performance to lose some of the hype as a dark horse in the Atlantic Coast Conference title chase.

That’s a lesson that stays with the No. 24 Wolfpack now that Dave Doeren’s team has its first national ranking in seven years entering Thursday night’s visit from No. 17 Louisville.

N.C. State (4-1, 2-0 ACC) has shaken off that season-opening loss to South Carolina, a game that saw the Wolfpack post more than double the number of yards and plays of the Gamecocks but lost 35-28. There have been four straight wins since, including a get-over-the-hump win at Florida State for possibly the biggest win of Doeren’s five-season tenure.

The Wolfpack started the season with more outside expectations than usual thanks to a veteran roster and depth built over years under Doeren. Now N.C. State — ranked for the first time since the final poll of 2010 — gets a shot at another Atlantic Division power in the Cardinals (4-1, 1-1), led by reigning Heisman Trophy winner Lamar Jackson.

“Really we’re just keeping everything inside the football facility,” junior running back Nyheim Hines said. “We’re not trying to listen to what outside people say because after South Carolina, people were falling off the bandwagon. Now they’re maybe back on it.”

The Cardinals are already in a hole in the division after a home loss to reigning national champion Clemson. A loss at N.C. State would all but end the Cardinals’ hopes of making up ground on the Tigers and earning a trip to the ACC title game.

“They all run to the ball,” Jackson said, “they’re all-out competing and they’ve been good so far this year.”

Louisville has spent the past two games since the Clemson loss earning lopsided wins against Kent State and Murray State by a combined margin of 97-13.

NEWS: It’s to see how @UofLFootball and NC State stack up …

Some other things to know about Thursday night’s Louisville-N.C. State game:

LIGHT-DUTY LAMAR: Louisville QB Lamar Jackson has played just five quarters over the past two weeks but has made the most of them. The junior has passed for 548 yards, rushed for 134 on 15 carries and combined for seven touchdowns. He threw a couple of interceptions against Kent State but feels like he corrected flaws while giving his body a chance to recharge. Asked about the benefits, he said, “Just keeping my body fresh and keeping me focused with a big game coming up this week.”

CONTAINING JACKSON: N.C. State’s stout defensive line, led by preseason AP all-American Bradley Chubb on the end, will have to keep Jackson from getting loose to make plays with his feet. “We can’t let him out of the pocket,” Chubb said. “All four of us have to do our job and collapse the pocket.”

STEPPING UP: Cardinals receiving leader Jaylen Smith will miss a third straight game with a wrist injury, creating another opportunity for others to fill the void. Five receivers have at least 100 yards, led by redshirt freshman Dez Fitzpatrick (280 yards, 6 TDs) and Seth Dawkins.

WR @dezfitz8 leads all freshmen and ranks in the top 10 nationally with 6 TD #BeatState pic.twitter.com/tFlP5xTwcN

LAST YEAR’S ROMP: N.C. State nearly upset eventual national champion Clemson on the road last year, but Kyle Bambard missed a 33-yard field goal for the win at the end of regulation in an overtime loss. That game threw the Wolfpack in a midseason tailspin, which included a 54-13 loss at Louisville last year for a team that played close in nearly all its losses. “We’ve tried to wipe it out, but it’s been circled on a lot of people’s calendars probably in the locker room,” N.C. State’s Nyheim Hines said. “It was really embarrassing.”

BOTH RANKED: Louisville’s visit to N.C. State will mark the first game between two ranked teams in the Wolfpack’s Carter-Finley Stadium since 2000. In that game, Florida State won 58-14 when longtime Los Angeles Chargers quarterback Philip Rivers was an N.C. State freshman starter.

This article was written by Aaron Beard from The Associated Press and was legally licensed through the NewsCred publisher network. Please direct all licensing questions to legal@newscred.com.