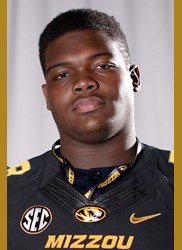 COLUMBIA, Mo. — Missouri freshman defensive tackle Kobie Whiteside sees the late Reggie White as a role model, but it has nothing to do with sacking the quarterback.

Sure, Whiteside set lofty on-field goals for 2017 — six sacks and 40 tackles — but it’s White’s faith, which earned him the moniker “Minister of Defense,” that really piqued his interest.

It’s also why Whiteside is endeavoring to learn Hebrew.

“When I was little, I looked into Reggie White,” Whiteside said. “I saw how he combined his spirituality with football, and that’s what I want to do.”

RELATED: A week-to-week guide for the entire 2017 college football season

“I wanted to learn it, so I could help myself get deeper into my religion,” Whiteside said. “I try to read my Bible and then read the Hebrew Bible to see the difference.”

He knows some of the Biblical Hebrew alphabet, but it’s a tricky language to acquire.

“You have to learn the English translation and then the symbols,” he said. “At least that’s how I had to learn it.”

Football has delayed his studies, but learning to read the Bible in its original language remains important to Whiteside, and he has a simple reason for the tedious exercise.

“Playing football gives you a good platform and people look at you more,” he said. “With this platform, I don’t want to put myself on there. I want to put my religion there — my God, my savior — in place of myself.”

Whiteside might be on a more-visible platform sooner than he thinks. He was a late addition to the Tigers’ recruiting class from Alief Taylor High in Houston last February, but he’s been a training-camp revelation.

Mizzou coach Barry Odom said he’s “probably the strongest guy on our team with just his sheer (weightlifting) numbers, but it shows up and translates onto the field. He’s got great quickness. If you look in a 10-yard box, he’s got tremendous quickness and uses his body with positioning and leverage really well.”

Whiteside also has a ceaseless motor, which can be hard to develop but is critical given the double teams he’ll face at the position.

“He’s played as hard as he could every snap, and that’s what we want,” new Tigers defensive line coach Brick Haley said. “That’s the culture that we want around here. We want guys that are going to play every snap with everything they’ve got in them. We want every play to be a strain for your body…and he’s done that, so he’s steadily moving up the depth chart and doing a great job learning the scheme.”

Kobie flew under the radar but has tremendous size and athleticism. Watch his highlights to see why:#MIZ #ShowMe17pic.twitter.com/I6tXhlRS8G

Whiteside’s advanced understanding of the playbook, an unsurprising trait considering his dedication to study outside of football, also set him apart.

He’s willing and eager to earn whatever reps and minutes MU’s staff gives him.

“The depth chart changes all the time, so I know I just have to work for it,” said Whiteside, who squatted 630 pounds in high school and hopes to be a personal trainer after football. “… Every day, there’s talented guys all through the depth chart. They make me work for it.”

This article is written by Tod Palmer from The Kansas City Star and was legally licensed via the Tribune Content Agency through the NewsCred publisher network. Please direct all licensing questions to legal@newscred.com.