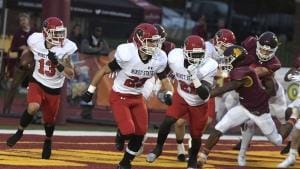 
There were plenty of highlights on opening night of the DII football season but Minot State’s kick return is one we’ll remember for a long, long time.

Minot State only mustered seven points against Minnesota Duluth, owners of one of the premier defenses in DII football. But man, did they make it memorable in the 52-7 defeat. Cory Carignan’s 104-yard scramble from end zone to end zone — with a little help from a huge block by Ali Mohamed — might be the wildest kick return touchdown we see all season:

WHAT TO WATCH: Complete schedule, rankings, players and games to watch for Week 1

Here’s the best of the rest from opening night.

Slippery Rock gets the first top 25 touchdown of 2019

It wasn’t the best touchdown of the night, but it was the first. And there was a lot for Slippery Rock, as quarterback Roland Rivers III threw for 405 yards and six touchdowns alone.

This Tigers and Mules showdown was an exciting offensive back-and-forth affair. Especially on this play when Tigner “Gurleyed” the defense for a few extra yards.

TJ Edwards becomes the GLVC touchdown leader on a bomb

Edwards is a welcome addition to the Greyhounds, transferring in from Southwest Baptist. He came in two touchdowns shy of the all-time GLVC mark and before Game 1 of his UIndy career was over, he got them.

🏈 | …and then this happened. And that also made TJ Edwards the GLVC’s all-time leader in career TD passes!

Central Missouri completes the upset over No. 11 Fort Hays State

While all the opening night games went final, the Mules and the Tigers fought down to the final seconds. Quarterback Brook Bolles had a tremendous second half for Central Missouri in completing the come from behind victory and opening night upset.

Don’t go to sleep yet. @UCMMules just took a four-point lead over No. 11 Fort Hays State with 1:27 left in the #D2FB Showcase.#MakeItYours pic.twitter.com/JrrzKjLqQk

Collin Wilson finished with five catches in the Ichabods opening night win. This was clearly the best one of them all.

Washburn’s Collin Wilson made one of the best catches I’ve ever seen while shooting a game. One-handed ridiculousness from the @wusports wide receiver. @SportsCenter, you’ll want it. pic.twitter.com/6eylXW8SpE