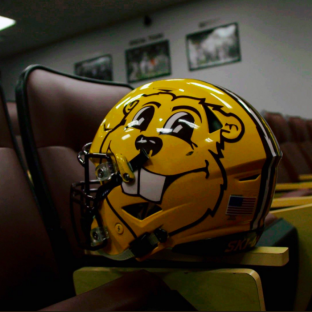 Goldy the Gopher, Minnesota’s inimitable mascot, dates all the way back to the early 1950s. According to the school, Goldy began in 1952 with a paper mache head that couldn’t be removed during games, and only had one eye hole for junior Jim Anderson, the very first Goldy, to peep through as he riled the crowd up during football games.

Roughly 65 years later, Minnesota’s mascot is as iconic a figure on the school’s campus as ever before, so the football team decided to surprise Goldy with a pretty big-time birthday present this weekend.

(His birthday is Sept. 23, but the Gophers have a bye week that weekend.)

If you couldn’t make it out in the video, Minnesota, in addition to going with all-gold jerseys when the team faces Middle Tennessee at home, will wear a Goldy-themed helmet featuring the gopher’s face on one side, with the traditional Minnesota block M on the flip side. Check it out:

Loving this @GoldytheGopher helmet! We will wear it on Saturday at @TCFBankStadium when we play Middle Tennessee. #Gophers #SkiUMah #RTB pic.twitter.com/MbivxcSpNM

It’s been an impressive first few weeks of fashion in the college football world; in Week 1, Florida and Michigan went all-out in their respective favorite colors, with Florida dressing in all blue and Michigan in all maize.

Then, in Week 2, Oregon wore jerseys designed by a trio of cancer survivors who have received treatment from the OHSU Doernbecher Children’s Hospital in Portland, Oregon.

And now, of course, Minnesota has joined the game with this helmet dedicated to its beloved Goldy.