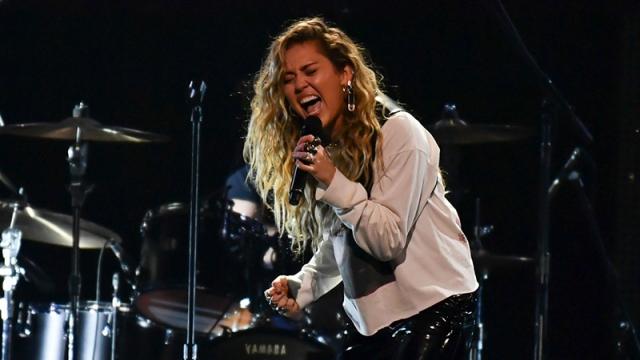 Turner Sports, CBS Sports and NCAA, alongside official NCAA Corporate Champions AT&T, Capital One, and Coca-Cola™ will present a special Tribute to Frontline Heroes performance featuring multi-platinum selling recording artist Miley Cyrus during the 2021 NCAA Men’s Final Four. Cyrus, also known as a songwriter and trailblazer, will perform on Saturday, April 3, during the Capital One Tournament Central show airing on CBS in between the first and second National Semifinal games with frontline heroes in attendance. Fans will also be able to enjoy the performance via NCAA March Madness Live* and view unique camera angles via the Final Four App presented by AT&T 5G.

Cyrus will perform several of her hits, including tracks from her critically acclaimed seventh studio album, Plastic Hearts, which debuted at #1 on Billboard’s Top Rock Albums chart and her sixth No. 1 album – between the two Final Four matchups – as a celebration of frontline workers and their continued service and sacrifices during the COVID-19 pandemic. Additionally, the NCAA will invite workers, including Indiana University Health system staff, to attend the performance in recognition of their tireless work on the frontlines of the pandemic.

About Turner Sports
Turner Sports, a division of WarnerMedia, is an industry leader in the delivery of premium sports content across all platforms, widely recognized for its long-standing partnerships with the NBA, Major League Baseball and NCAA Division I Men’s Basketball Championship. The Turner Sports portfolio includes two of the hottest digital destinations for young sports fans in Bleacher Report and House of Highlights, along with the B/R Live streaming platform and ELEAGUE, a leading gaming and esports entertainment brand. Turner Sports co-manages NBA Digital – comprised of NBA TV, NBA.com, NBA LEAGUE Pass, the NBA App and NBAGLEAGUE.com – as well as NCAA.com and the NCAA March Madness Live suite of products.

About CBS Sports
CBS Sports, a year-round leader in cross-platform sports coverage, broadcasts a portfolio of events on the CBS Television Network, including THE NFL ON CBS; college football, including the SEC ON CBS; college basketball, including the NCAA Division I Men’s Basketball Championship; golf, including The Masters®, PGA Championship and PGA TOUR; soccer, including the UEFA Champions League and NWSL; and CBS SPORTS SPECTACULAR. In addition, the division includes CBS SPORTS NETWORK, the 24-hour cable home of CBS Sports which televises live sports programming throughout the year, including college football and basketball games, UEFA Champions League and Europa League action, as well as a full slate of original programming and studio coverage. CBS Sports also delivers an extensive lineup of soccer coverage on Paramount+, including every UEFA club competition match as the exclusive English-language home in the U.S., and produces INSIDE THE NFL for Paramount+. CBS Sports Digital’s multi-platform offerings include CBSSports.com and the CBS Sports apps for mobile and connected TV devices; the 24/7 streaming sports news network CBS Sports HQ; 247Sports; MaxPreps; CBS Sports fantasy games; and SportsLine.

About AT&T Communications
We help family, friends and neighbors connect in meaningful ways every day. From the first phone call 140+ years ago to mobile video streaming, we @ATT innovate to improve lives. AT&T Communications is part of AT&T Inc. (NYSE:T). For more information, please visit us at att.com.

About Capital One
At Capital One (www.capitalone.com) we’re on a mission for our customers – bringing them great products, rewards, service, and access to unique and unforgettable experiences they are passionate about. Capital One is a diversified bank that offers products and services to individuals, small businesses and commercial clients. We use technology, innovation and interaction to provide consumers with products and services to meet their needs. Learn more at capitalone.com/access

About The Coca-Cola Company
The Coca-Cola Company (NYSE: KO) is a total beverage company with products sold in more than 200 countries and territories. Our company’s purpose is to refresh the world and make a difference. Our portfolio of brands includes Coca-Cola, Sprite, Fanta and other sparkling soft drinks. Our hydration, sports, coffee and tea brands include Dasani, smartwater, vitaminwater, Topo Chico, Powerade, Costa, Georgia, Gold Peak, Honest and Ayataka. Our nutrition, juice, dairy and plant-based beverage brands include Minute Maid, Simply, innocent, Del Valle, fairlife and AdeS. We’re constantly transforming our portfolio, from reducing sugar in our drinks to bringing innovative new products to market. We seek to positively impact people’s lives, communities and the planet through water replenishment, packaging recycling, sustainable sourcing practices and carbon emissions reductions across our value chain. Together with our bottling partners, we employ more than 700,000 people, helping bring economic opportunity to local communities worldwide. Learn more at www.coca-colacompany.com and follow us on Twitter, Instagram, Facebook and LinkedIn.

About the NCAA
The NCAA is a diverse association of more than 1,100 member colleges and universities that prioritize academics, well-being and fairness to create greater opportunities for nearly half a million student-athletes each year. The NCAA provides a pathway to higher education and beyond for nearly half a million student-athletes pursuing academic goals and competing in NCAA sports. Visit ncaa.org and ncaa.com for more details about the Association and the corporate partnerships that support the NCAA and its student-athletes.