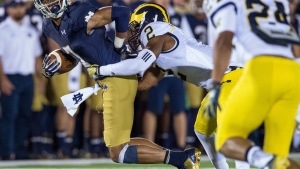 Michigan vs. Notre Dame: 6 of the most memorable games


Michigan and Notre Dame have played 42 times; the first in 1887 is said to be the first football game ever played by the Fighting Irish.

No. 43 is Saturday night when the No. 12 Fighting Irish face the 14th-ranked Wolverines.

The schools played nine times before 1910, a couple of times in the ’40s and then, in the late 1970s, the Wolverines and Fighting Irish became regular — if not annual — rivals. What the series lacks in quantity it makes up for in quality. The winningest programs in college football history have provided plenty of memorable moments.

RELATED: Here’s who won notable quarterback battles around the country

Most recently, Michigan won three straight games against the Fighting Irish from 2009-11 by a combined score of 101-89. Those games were wildly entertaining — especially Michigan quarterback Denard Robinson — even if the teams were mostly mediocre. Before 2007, there was a streak of 25 straight Michigan-Notre Dame games in which at least one was ranked.

Here are six of the best moments from the Michigan-Notre Dame rivalry:

1978 — The “Reunion Game” after the teams had gone more than three decades without playing. The defending national champion Fighting Irish, with Joe Montana at quarterback, were ranked 14th and Michigan was No. 5. Notre Dame took a 14-7 lead at halftime in South Bend, Indiana, but behind quarterback Rick Leach, the Wolverines rallied for a 28-14 victory.

1979 — Notre Dame linebacker Bob Crable blocked a field-goal attempt by No. 6 Michigan in the final seconds to preserve a 12-10 victory for the No. 9 Fighting Irish in Ann Arbor.

1988 — The 13th ranked Fighting Irish begin a national championship season with a 19-17 victory in South Bend behind four field goals from Reggie Ho and a punt return for a touchdown by Ricky Watters.

1989 — On a rainy day at the Big House, Raghib “Rocket” Ismail returned two kickoffs for touchdowns and No. 1 Notre Dame beat No. 2 Michigan 24-17 in what was the last game between the teams that Wolverines great Bo Schembechler would coach. He retired after the season.

MORE: Wisconsin’s defense will have some fresh faces for the season opener

1991 — A week after scoring four touchdowns against Boston College, Desmond Howard vaulted to the front of the Heisman Trophy conversation with two more scores in No. 3 Michigan’s 24-14 victory against No. 7 Notre Dame. Howard’s diving touchdown catch from Elvis Grbac on fourth-and-1 in the fourth quarter became his Heisman moment at the Big House.

1994 — Late fields goals had gone Notre Dame’s way often in the series, but this year Remy Hamilton kicked a 42-yarder in the final seconds to give No. 6 Michigan a 26-24 victory against the third-ranked Irish in South Bend.