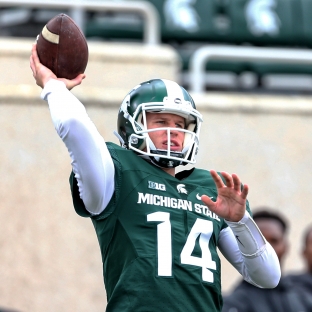 EAST LANSING, Mich. — Mark Dantonio could have avoided the question or talked around it. Last December, with the offseason less than a month old, the Michigan State coach was asked about his quarterback situation for 2017.

There were no obvious front-runners after a dismal season in which the Spartans went 3-9, but Dantonio made it clear that Brian Lewerke was the man to beat.

“It’s definitely helped my confidence,” Lewerke said at media day Monday. “It’s helped me grow into the role of being a leader. It’s helped the team look up to one single individual.”

As the Spartans enter this season amid reduced expectations from around the nation, Lewerke is an interesting variable. He played so little last year that just about anything is possible. If Michigan State were a veteran team with a good shot at a Big Ten title, having a quarterback like Lewerke might be cause for concern. But these Spartans are simply trying to re-establish themselves after a shocking decline in 2016, and if Lewerke can show growth this year as a redshirt sophomore, Michigan State’s future will look a lot brighter.

Lewerke played in four games in 2016, completing 31 of 57 passes for 381 yards. It’s not a particularly extensive resume. Tyler O’Connor, who was a senior, made most of the starts at quarterback.

Lewerke started against Northwestern and Maryland in October, but the Spartans lost both games. He entered as a substitute against rival Michigan, but his injury came in the fourth quarter that day, and his season was over.

The broken leg robbed Lewerke of a chance to gain more experience down the stretch, but it could have been a lot worse.

“I was lucky I didn’t have to get surgery. I was also lucky it didn’t tear my ACL or anything like that,” Lewerke said. “That was one of the things the doctors said that I avoided. That was a close one.”

RELATED: 50 storylines and questions for the football season

Lewerke participated fully in spring practice, so his health isn’t in question as the season approaches. In fact, Dantonio expects his legs to be an asset.

“He’s making good decisions. He’s got a live arm. He’s big,” Dantonio said. “Understands the offense, and he can create. Probably in terms of creating with his feet, he’s probably as good as we’ve had since I’ve been here.”

Last month, Dantonio said Lewerke compares favorably in some ways to Kirk Cousins and Connor Cook, two NFL quarterbacks who led Michigan State to Big Ten championships recently. Cook’s last season in East Lansing was 2015, when the Spartans made it to college football’s four-team playoff. Without him, the Spartans endured a seven-game losing streak in the middle of last season.

Michigan State turned to Lewerke in the middle of that stretch, but he didn’t have very long to establish a rhythm with his teammates, so preseason practice this year is important.

“The thing at quarterback is you’ve still got to be you,” quarterbacks coach Brad Salem said. “You don’t try to fake who you are. … He knows he’s got to step up vocally a little bit more than maybe he’s comfortable at doing, but he’s done a very good job this fall.”

Video recap from today’s first practice of the season, including comments from @DantonioMark and QB Brian Lewerke: https://t.co/WfDhEYRNlb

If Lewerke struggles this season, Michigan State could turn to Damion Terry, a fifth-year senior who has attempted only 72 passes in his career. Messiah deWeaver, a redshirt freshman, hasn’t played at all.

But the hope is for Lewerke to prove worthy of the starting job. Dantonio made that clear a while ago.

This article was written by Noah Trister from The Associated Press and was legally licensed through the NewsCred publisher network. Please direct all licensing questions to legal@newscred.com.