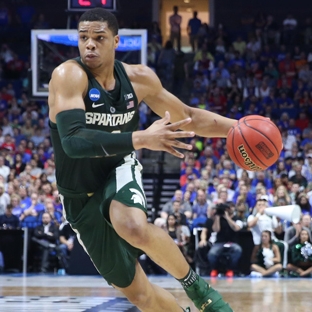 EAST LANSING — You can win a title in college basketball without a player who can break down the defense at the end of the shot clock. It’s not the NBA.

See North Carolina last year or Villanova the year before. Neither squad had a lottery talent that looked like Kevin Durant.

But you can’t win without a player who thinks he can do this. There is a difference.

Michigan State lost to this sort of player Tuesday night in Chicago. Grayson Allen, Duke’s senior shooting guard, isn’t a maestro creator. But he acts like one.

In the college game, supreme belief — along with at least some talent — makes up for a lack of supreme talent. Which brings us to the Spartans’ Miles Bridges.

He did not play well against the Blue Devils, even though he scored 19 points and hit five threes. Don’t be fooled by the numbers.

Learn from it. Get better. Onto the next https://t.co/vKW8Cu8MIz pic.twitter.com/gmKo3bJwx8

In fact, he was so mad at his performance, especially after he watched the game on the plane home, and then again at his apartment at 2:30 in the morning, that he texted his coach, Tom Izzo, with a promise:

“I won’t ever play not possessed again,” he told him.

Izzo smiled Thursday as he recounted the exchange. He knows what an ‘ah-ha’ moment like that could mean, not just for Bridges, but for his team.

“I was just upset watching the game,” he said. “I need to be more aggressive. Scoring and getting my teammates involved — and rebounding. I told him I didn’t play like I would do anything to win.”

No, he didn’t. Allen did. That was the game. Though it’s not simply about the numbers.

It’s easy to look at Allen’s scoring — he made seven threes on his way to a career-high 37 points — and say that’s why Duke won. But the timing of his buckets mattered, too.

His three-pointer at the end of the first half finished an 8-0 run that gave Duke the lead at the break. And his three from the top of the key in the final two minutes ended the Spartans’ chances.

In between, Allen hit momentum-shifting shots. They were deflating to the Spartans, and uplifting to his teammates. Bridges’ threes, meanwhile, may have helped keep MSU in the game, but he could never find the single bucket to propel his team forward.

“I came out passive,” he said, “and that’s when I start making bad decisions.”

That hesitancy was clear down the stretch at the United Center. And if these Spartans want to make a run at the title — and they do — Bridges’ approach has to change.

Back in action this Sunday at

Fortunately for Izzo, his sophomore star understands this, and that’s critical, because self-awareness is the first step in the journey toward righteousness, and Bridges wants to be righteous on the court. Yet acknowledgement isn’t enough, either.

Bridges has to seize the battle within himself. For all his outsized athletic gifts, he remains a pleaser; comfortable slipping into the anonymity of a group, which explains — in part — why he returned to the college game. Still, his athleticism and skill demand a nastier on-court disposition.

Finding the balance will be tricky, as Izzo pointed out Thursday. Consider Allen, who is the most despised player in college basketball, and who went too far the other way after a stellar freshman year.

“You can’t be somebody you’re not,” said Izzo. “You have to be careful.”

Allen, to his credit, recalibrated his demeanor this offseason and gave a mature and precise performance against the Spartans. We’ll see if it holds as the season unfolds.

The challenge for Bridges is to burrow into the back eddy of his identity and uncage the kid who knows how good he already is. He doesn’t have to pretend to be Michael Jordan or Kobe Bryant or even former Spartan, Draymond Green.

That would be a mistake anyway.

His model should be more Steph Curry, a reflective and spiritual soul who combines humility with arrogance, and thrills in applying the dagger. And while Bridges will never have Curry’s game, he can have a similar balance.

MSU’s winter depends on it.

This article is written by Shawn Windsor from Detroit Free Press and was legally licensed via the Tribune Content Agency through the NewsCred publisher network. Please direct all licensing questions to legal@newscred.com.