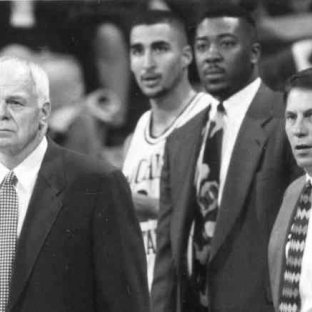 Michigan State Athletics is sad to announce that Jud Heathcote passed away Monday at the age of 90 in Spokane, Washington.

“The basketball world is a sadder place today with the passing of Jud Heathcote. No one cared more about the welfare of the game than Jud. He was a coach’s coach and a mentor to many. Our hearts are filled with sadness and deepest sympathy for his wife Beverly and the Heathcote family.

“Without a doubt, he was one of the most influential people in my life, giving me a chance when no one else would. Any coaching success I’ve ever had is because of him. Long after he left Michigan State, he was still one of the first people I would call when I had a tough decision in coaching or life.

“Michigan State has lost one of its icons today. And yet nothing can erase his impact on the program, the players he coached and the coaches he mentored. Spartan basketball is what it is today because of Jud Heathcote.”

“Coach Heathcote had an impact on so many people. For me, he was among the best teachers I had the opportunity to be around. Reflecting on my career and life, Jud was among the most influential people in regards to my preparation for both. He will be missed, yet his memory will be seen through the many different people he impacted. Our thoughts and prayers are with his wife Bev and the entire Heathcote family.”

In his third season in East Lansing, Heathcote led Michigan State to its first NCAA men’s basketball championship in 1979 and won back-to-back Big Ten titles in 1978 and 1979. During those two seasons, Heathcote had the opportunity to coach one of the game’s greatest players, All-American Earvin “Magic” Johnson, who propelled the Spartans to a 51-10 record in his two seasons at MSU.

A two-time Big Ten Coach of the Year (1978 and 1986), Heathcote coached seven All-Americans (Johnson, Gregory Kelser, Jay Vincent, Sam Vincent, Scott Skiles, Steve Smith and Shawn Respert) and 22 NBA players. Five of his players won the Big Ten scoring title a total of six times. During Jud’s tenure, MSU had at least one player among the first-team All-Big Ten selections in 12 of his 19 years.

Jud Heathcote guided the Spartans to their first NCAA Championship in 1979. pic.twitter.com/3IfcAsHI4Q

Prior to his retirement, Heathcote ensured that the future of Spartan basketball would be in good hands. In 1990, he promoted assistant Tom Izzo to associate head coach, and fought for Izzo to be named his successor.

In his five-year stint (1971-76) as head coach of Montana, Heathcote led the Grizzlies to two Big Sky championships and was named Inland Empire Coach of the Year and Big Sky Coach of the Year in 1975. The two conference titles were the first in school history.

He served as an assistant coach of the United States Pan American team in 1975 and 1987.