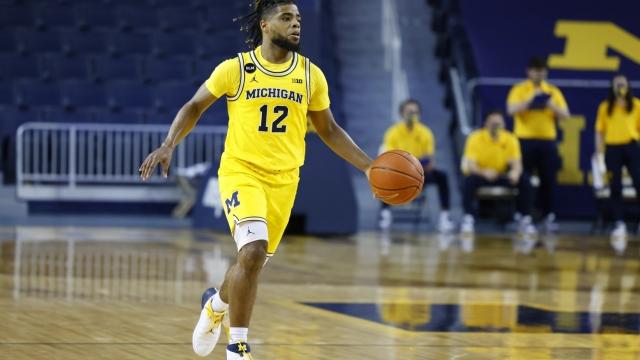 Andy Katz was 3-6 with his college basketball predictions last week (his first losing week of the season). Katz’s overall record is 36-22 and he’s back with more picks this week.

You can read Katz’s picks below and listen to him make them on this week’s episode of the March Madness 365 podcast. CBS’s Clark Kellogg, Villanova’s Jay Wright and Virginia’s Tony Bennett also join podcast.

Tennessee is ranked No. 6 in the nation and has only lost one game all season — to Alabama at the beginning of January. Even though Florida is the home team, Katz likes the Volunteers because of their experience and talent. The Gators are still trying to find their footing in the SEC. They lost their star Keyonte Johnson for the year earlier this season and are 3-3 in the conference.

Michigan was the hottest team in basketball just about a week ago. The Wolverines stormed into the top 25 with an undefeated record before falling to No. 17 Minnesota on Jan.16. Speaking of hot teams, Purdue is cruising right now after victories over Michigan State, Indiana and Penn State. Despite not being ranked, Katz is high on the Boilermakers but thinks the Wolverines are a better team and can outmatch Purdue to get the win on the road.

Baylor is fresh off of a 77-69 victory over No. 9 Kansas and it doesn’t look like the Bears are slowing down anytime soon. Katz is very confident in the Bears’ ability to score against the Cowboys and shut down star freshman Cade Cunningham. He thinks the four-guard attack Baylor has used to dismantle teams will be too much of a challenge for Oklahoma State to overcome, even at home.

UConn is looking for a bounce-back win after an upset loss to St. John’s on Monday afternoon. Katz likes Creighton to notch a top-25 win here. The Bluejays will have star guard Marcus Zegarowski back — a key piece missing in their loss to Butler last week.  UConn is without star James Bouknight, out with an injury.

TURN IT AROUND: Petty leading Alabama on a remarkable run this season

Florida State will be looking for revenge against the Tigers on Saturday. Clemson handled the ‘Noles on their home floor, 77-67, but FSU has bounced back since that Dec. 29 loss. The Seminoles have won three straight and sit at 4-1 in the ACC with their consecutive victories over NC State, North Carolina and Louisville. Pair that with Florida State’s history of winning in Tallahassee and it looks like a favorable matchup for Leonard Hamilton and company, according to Katz.

Ohio State comes to Madison with a three-game winning streak but Katz likes the Badgers to defend their home court and get the win. Wisconsin dropped a home game to Maryland about three weeks ago, which Katz noted as a wake-up call for the Badgers. He thinks the Buckeyes could pull off the upset but doesn’t think the Badgers will budge this Saturday.

It’s weird to think that a mid-season matchup between Duke and Louisville would be a game between two unranked teams, but here we are. Louisville is fresh off of a home loss to Florida State and Duke is coming off of a loss to No. 16 Virginia Tech. The Blue Devils will have a chance before this game to get back in the win column with a game versus Pittsburgh. Katz sees Louisville as ultimately the better team in this matchup.

Both teams in this matchup have games earlier in the week — Tennessee faces Florida and Mizzou takes on South Carolina, both on Tuesday. Depending on how those matchups go, this could be a very crucial game when it comes to the makeup of the SEC standings. Katz likes the Volunteers here though, as he ranks Tennessee and Alabama as the two best teams in the conference. Also, Tennessee already beat the Tigers this season — 73-53 at Missouri.