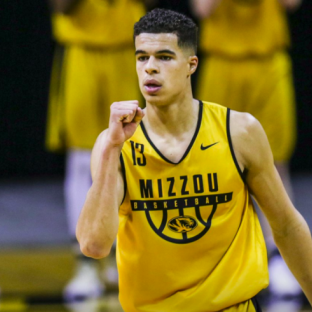 NASHVILLE, Tenn. — Missouri forward Michael Porter Jr. has yet to play his first college game, and he’s already making it clear he has very high expectations both for himself and the Tigers.

It’s one reason why he chose Missouri.

“I always kind of wanted to be the type of player that could go to a school that could make a difference,” Porter said Wednesday at the Southeastern Conference men’s basketball media day. “I didn’t want to go to a Kansas or a Kentucky where I could be just another great player. I wanted to go to a school where I could make a difference and leave a legacy.”

And it didn’t hurt the Tigers’ chances of signing him after his dad landed on the Missouri staff. There are also strong family ties in Columbia.

Porter’s first college choice was Washington until coach Lorenzo Romar was fired earlier this year. He decided to go back to Columbia, Missouri, when coach Cuonzo Martin hired Porter’s father as an assistant coach.

The 6-foot-10 forward also will be playing with his younger brother, Jontay. It’ll be a family affair that should make his transition to college feel like going home.

MORE: Why Kentucky basketball’s young stars will outpace the competition in the SEC

“I know campus like the back of my hand, and my family’s all there so it really felt like home,” Porter said. “And it made it really, really easy, and my family’s going to be there. I don’t know how kids go off to college and don’t see their mom and dad for so long. That’d be really hard for me.”

That helps with Porter famous enough already that people stop to stare at while shopping for groceries or walking to class. It’s why Porter turned off his social media accounts believing he receives enough attention already.

Not only is he being coached by his father and playing with his brother, Porter’s two sisters are playing for Missouri’s women’s basketball team. Bri is a senior forward, while Cierra is a junior. His aunt, Robin Pingeton, coaches the Missouri women’s hoops team.

Porter led his high school team to state titles in each of his last two years and was named the Gatorade national player of the year. He also is the sixth McDonald’s All-American to sign with Missouri but first since 2000.

So good that Porter shared preseason player of the year honors with Georgia senior Yante Maten and Texas A&M sophomore Robert Williams. Missouri junior Kevin Puryear compares Porter to Kevin Durant with his ability to shoot over anybody.

“He just makes it look so easy,” Puryear said. “Double-teams, triple-teams, he’s shooting over the top of it. Just making it effortless sometimes. It’s frustrating to guard him. I’m not going to play anybody like Michael the whole year, so I’m getting better definitely playing against him.”

#MPJr has been named to @hoophall’s Erving Award Watch List. Just 1-of-20 from across the nation. #MIZ pic.twitter.com/POMFPsVLs9

Porter also wants to make it clear that he’s not automatically heading to the NBA after this season. He said it’s important for him to leave a legacy at Missouri and help revive a program that went 8-24 last season and hasn’t qualified for the NCAA Tournament since 2013.

“Everybody thinks I’m not serious when I say that, but I actually might spend more than one year in college,” Porter said.

Well, maybe not if the Tigers are as good as Porter believes they will be.

This article was written by Teresa M. Walker from The Associated Press and was legally licensed through the NewsCred publisher network. Please direct all licensing questions to legal@newscred.com.