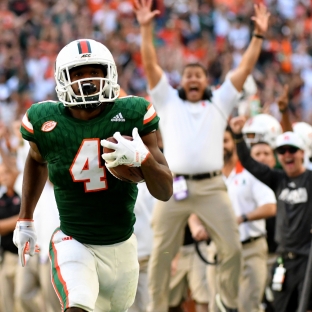 Miami football prepares for Pitt, one win away from unbeaten regular season

Early on, it had all the makings of a nightmare for the Miami Hurricanes.

They couldn’t get their run game going. A veteran quarterback was dissecting their secondary with precision. The big mistakes outnumbered the big plays and for a good chunk of Saturday afternoon, Miami looked listless against a Virginia team that came into the game having lost three of its past four.

Ultimately the third-ranked Hurricanes fell behind by two touchdowns twice before the tide started to turn and UM scored 30 unanswered points to rally for a 44-28 win over the Cavaliers. But the entire afternoon served as a reminder that no matter what Miami has done this season, no matter how high it has climbed in the College Football Playoff rankings, the opponents on their schedule aren’t about to make things easy for them.

College Football Playoff rankings: New No. 1 Alabama leads the way, Miami at No. 3

The Hurricanes (10-0, 7-0 ACC) can expect that to continue Friday when they head to Pittsburgh for their regular-season finale. The Panthers (4-7, 2-5) will look to spoil Miami’s improbable run, snap the Hurricanes’ 15-game win streak and finish their own season on a high note.

And unlike Saturday against Virginia, the Hurricanes won’t be able to rely on the comforts of home to help. There likely won’t be a huge crowd at Heinz Field cheering them on and they won’t have South Florida’s heat and humidity to help them wear down their opponent. They also won’t get the spark that comes from playing a major rival in a prime-time game and will instead, have to overcome the drudgery that can sometimes come with a noon kickoff. The Hurricanes have struggled early in both their previous games that have started at that time.

Yesterday, the Canes faced adversity and took the challenge head on to stay undefeated. pic.twitter.com/WbzCemGhJD

It has all the makings of yet another letdown game, but Miami’s players say they learned from their experience against the Cavaliers on Saturday.

“It was difficult,” Hurricanes linebacker Shaquille Quarterman said after the Hurricanes struggled with Virginia. “We had to adapt to a different schedule with two 8 p.m. games in prime-time. With it being a noon game, you still have to be able to execute like you would if it was a prime-time game, so it took us a little while. It actually took us too long, actually. But once we got it going, we got it going.

Auburn football: Tigers’ Kerryon Johnson believes Iron Bowl ‘should be one for the ages’

“A lesson was definitely learned. Not that we were, but we can’t become complacent at all in any matter. Going into this short week, we’re just planning to prepare better and better each week.”

That short week is one of the challenges facing the Hurricanes, who will be playing in their 10th game in a row without an off week since Sept. 23. UM’s schedule, impacted by Hurricane Irma, forced the team to make adjustments and that once-vacant Oct. 7 date was filled by a make-up ACC game against rival Florida State that was pushed back because of the storm.

This article is written by Christy Cabrera Chirinos from Sun Sentinel and was legally licensed via the Tribune Content Agency through the NewsCred publisher network. Please direct all licensing questions to legal@newscred.com.