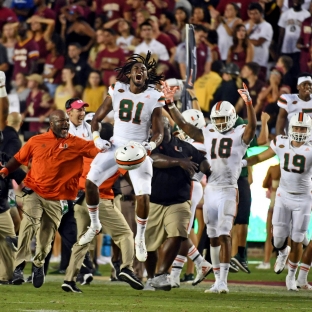 Miami football: Hurricanes could use big FSU win as a momentum-builder

Many of college football’s greatest rivalries get part of their appeal from anticipation. The Iron Bowl, Ohio State-Michigan, Army-Navy — these series wait until the end of the regular season, showdowns that the entire fall schedule builds toward.

That’s not the case for Miami-Florida State. The Seminoles’ final regular-season game is reserved for its other in-state rival, Florida. That means that Miami’s chief rivalry is played earlier in the season, with no set annual date. It floats around from September to October to November, and whenever it falls, it’s almost as if Miami has two seasons every year: before FSU and after FSU.

For the first time since 2009, Miami’s first season ended in a victory. With the game pushed back three weeks because of Hurricane Irma, Miami finally traveled to Tallahassee on Saturday afternoon for the annual showdown with the Seminoles, and the result was yet another memorable finish in a rivalry historically known for down-to-the-wire results and agonizing losses.

Miami won 24-20, sending the Seminoles — who are far more talented than their record indicates — to their third loss in four games to start the season. Florida State went ahead on a 20-yard touchdown pass from James Blackman to Auden Tate with 1:24 left, and Miami hoped to at least drive for a field goal to force overtime. It got more than that, as quarterback Malik Rosier led the Canes down the field with the help of Braxton Berrios and Travis Homer. On first down at the 23-yard line with 11 seconds left, Rosier fired to Darrell Langham short of the end zone, and Langham broke over the goal line for the winning points.

The victory ended Miami’s seven-game losing streak in the rivalry, and it ended Jimbo Fisher’s perfect record against the Hurricanes as head coach of the Seminoles. It ended an agonizing run of heartbreak, too, as the past three meetings and four of the past six were decided by five points or fewer, including a 20-19 FSU win last year after Miami’s late PAT was blocked.

It is an exhausting, emotional in-state rivalry, one that can’t help but take a lot out of both teams. For Miami especially, though, it’s merely a beginning. Miami, which is 4-0 and just won its toughest ACC road game, must move on and ensure that the opportunity created by winning in Tallahassee will not be wasted as the Canes seek their first ACC Coastal title sine joining the conference in 2004.

MORE: A list of the remaining undefeated teams in college football

Moving forward first requires dealing with some unfortunate news from the weekend: Standout tailback Mark Walton will miss the rest of the season with an ankle injury, a tough blow to take, given that Walton was the ACC’s best returning running back. The likely next starter is Homer, a sophomore who provided what Miami fans hope is a glimpse of things to come with runs of 10 and 14 yards in the final minute to set the stage for Rosier’s winning touchdown pass to Langham.

Injuries have been an issue, as star receiver Ahmmon Richards has also been limited by a hamstring problem, but despite those hang-ups, the Canes move forward with the most confidence this program has had in years. At No. 11 in this week’s AP top 25 Miami is the only Power Five team in Florida that is ranked, as Florida State and Florida are both outside. (UCF and USF are both in.) It is viewed as the second-best team in the ACC behind Clemson, and it does not have to meet the Tigers — or Louisville or N.C. State — in the regular season.

Miami has tough remaining home dates with Virginia Tech, Notre Dame and, on Saturday, Georgia Tech, but it has one of the nation’s best defensive fronts and an improving quarterback in Rosier, who has thrown for 1,074 yards with 11 TDs and three picks and made several big throws in the second half of the FSU game against a talented secondary.

Last year, Miami lost three games in a row after the FSU heartbreak. In 2014, it lost three in a row to end the season after losing to FSU. In 2013, it started 7-0, lost to FSU and finished 9-4. It’s been eight years since we’ve seen how Miami responds to a win over Florida State.

Saturday’s dramatic finish will etch its own place in the lore of this storied rivalry, but how the game is remembered is contingent upon what the Hurricanes do to take advantage of it over the next several weeks as they try to return to national prominence.

This article was written by Matt Brown from Sports on Earth and was legally licensed through the NewsCred publisher network. Please direct all licensing questions to legal@newscred.com.