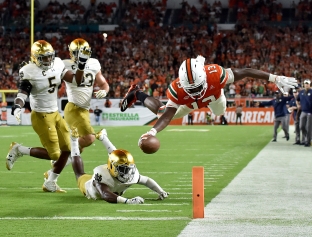 A sixth national title is no longer a far-fetched dream.

And yes, the Miami Hurricanes are back — with a vengeance.

No. 7 Miami throttled No. 3 Notre Dame 41-8 on Saturday at Hard Rock Stadium, electrifying the ecstatic crowd of 65,303 and no doubt shocking the nation and the College Football Playoff selection committee that had the Hurricanes ranked seventh behind four one-loss teams.

Call us what you want to call us.

The bruising, battering Canes (9-0, 6-0 ACC) made the Fighting Irish (8-2) look like pacifists, eliciting chants of “Over-rated” and “It’s Great to be a Miami Hurricane” by the fourth quarter and probably making old-timers think they were witnessing the 2001 Canes.

“They kicked our a–,” said 6-8, 315-pound Notre Dame left tackle Mike McGlinchey, part of what is considered the top offensive line in the country. “They played really, really hard and really fast.”

The Hurricanes learned before the game that they had clinched the Coastal Division title of the Atlantic Coast Conference by virtue of Virginia’s loss to Louisville — and will face defending national champion Clemson (9-1, 7-1) in the league title game on Dec. 2.

Miami is up 34-0 after this one. pic.twitter.com/VRujFHTnXb

“It’s incredible,” said receiver Braxton Berrios, who scored UM’s first touchdown in the opening quarter on a 7-yard fade route in the right corner of the end zone. “We’re going to the ACC Championship for the first time in the school’s history. That was our first goal of the year. We have bigger things to attend to now.

Miami, led by another impressive performance by quarterback Malik Rosier, 146 rushing yards by Travis Homer and a suffocating defense that held the Irish to 261 yards, is now one of only three undefeated Power 5 programs after No. 1 Georgia was crushed by Auburn, and could rise into the top three of the CFP rankings.

If Miami defeats remaining regular-season ACC opponents Virginia at home next Saturday and Pittsburgh on the road Nov. 24, then beats No. 4 Clemson for the ACC title, the Canes would almost definitely make it to the playoffs.

UM, which extended its nation-leading win streak in the Football Bowl Subdivision to 14 games, is one victory shy of its first 10-win season since 2003, when it went 11-2 and beat Florida State in the Orange Bowl during Miami’s final season in the Big East.

Coach Mark Richt is now 18-4 in his first 22 games with the Hurricanes.

“What a wonderful night for our fans, for our players, just every single person who is a part of this program,” Richt said, “and just cares about each other, loves each other and trusts each other to do their job. Notre Dame without a doubt is a great team. But it just got away from them. I never would have predicted what happened, but it happened, and I’m thankful for it.”

Notre Dame got on the scoreboard for the first time with 12 seconds left in the third quarter on a 14-yard pass from Brandon Wimbush to Alize Mack. The two-point conversion by Wimbush made it 34-8.

UM had a 27-0 lead by halftime, prompting ESPN analyst Kirk Herbsteit to say at one point during the telecast, “Maybe Miami is the best team in the country.”

The Canes dominated from the start, with the defense holding the Irish to 109 rushing yards, making vicious hits and earning the vaunted Turnover Chain on three interceptions in the first half and a sack/strip/fumble recovery by freshman Jon Garvin with 8:50 left in the game.

The turnover chain is here to stay. pic.twitter.com/bP8dEX5BFP

Bandy’s was extra special, as he picked off Wimbush at the UM 35-yard line and sprinted 65 yards for the Canes’ first defensive touchdown of the season with 22 seconds left before halftime.

“It meant a lot,” Bandy said. “Once I caught the ball I saw green grass and went to the house with it. It was a game-changing moment.”

This DeeJay was spinnin’ the good ones on Saturday! pic.twitter.com/QBXd7WdLdA

Dallas followed with another touchdown, this one a 5-yarder, with four minutes left in the game.

“The defense told me that if we put up 21 we were going to win,” Rosier said, “and they held up their end of the bargain.”

By this time Notre Dame was likely in a semi-stupor state, and Miami and its long-starving fans were in Hurricanes Heaven.

“Credit to them all over the place,” senior Irish linebacker Drue Tranquill said. “That was the loudest game I’ve ever played in.”

This article is written by Susan Miller Degnan from Miami Herald and was legally licensed via the Tribune Content Agency through the NewsCred publisher network. Please direct all licensing questions to legal@newscred.com.