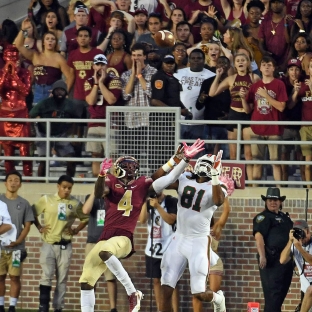 Miami football: Darrell Langham has twice been "Mr. Clutch" for the No. 8 Hurricanes

There’s no stat column for drama.

No player wins or loses a game on his own, but No. 8 Miami — unbeaten and in control of its Atlantic Coast Conference destiny — could easily have two losses and be out of the league race if not for Langham’s last-second heroics. The surprise star was behind no fewer than six receivers on Miami’s initial depth chart, and now is getting called “Mr. Clutch” by Hurricanes coach Mark Richt.

“Just in the right spot at the right time,” Langham said.

He may be the only one at Miami downplaying his accomplishments. Langham’s touchdown catch with 6 seconds left gave Miami a win over Florida State two weeks ago and ended the Hurricanes’ seven-game losing streak in the rivalry. And his 28-yard grab on fourth down in the final minute last Saturday set Miami up for what became a 25-24 win over Georgia Tech.

When Miami needs a big play most, Langham has delivered.

One by Darrell Langham

Miami (5-0, 3-0 ACC) plays host to Syracuse (4-3, 2-1) on Saturday. The Orange come in with two of the three leading receivers in the nation — Miami-area native Steve Ishmael has 62 catches, Ervin Phillips has 56. Ishmael and Phillips both had 11 catches in the same game earlier this season against LSU. Langham has only nine grabs all season.

But he’s made the most of those limited opportunities.

College football rankings: Behind the numbers of the AP Top 25 for Week 8

All nine of his catches have gone for first downs, five of them have been for more than 15 yards, three of them for more than 25. And all that has come after he was a non-factor in his first three years at Miami, getting redshirted as a true freshman and then being on the practice squad in each of the last two seasons.

“When you’re third-string going into a game and at the end of the game you make the play that everybody wants to talk about, that’s impressive,” Richt said. “He’s always been the right kind of person, the right kind of student. Now he’s starting to do some things on the field.”

Part of the reason why Langham has finally gotten this opportunity is because wide receiver Ahmmon Richards, who was expected to be the team’s top option this season, has been limited for nearly two months with a bad hamstring. Richards has just seven catches in two games so far this season, though Miami is hopeful that he’ll be full-go soon — possibly even this week.

Even when Richards returns, it’s hard to imagine Miami forgetting to get Langham the ball. He has found one drawback to dramatics — when he walks around campus now, some students seem to stop and stare.

“Everyone says good job, thank you, like kind of celebrates,” said Langham, who was picked by Miami’s staff as a captain for the Syracuse game. “To me, it’s really nothing. I just have to get my job done.”