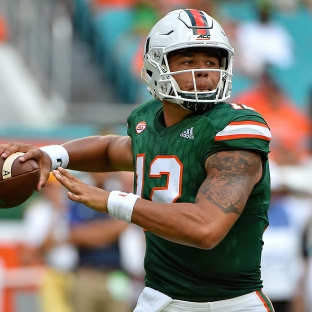 DURHAM, N.C. — Duke is flirting with its best start in more than a decade after three straight wins against power-conference opponents. Things get tougher with a Friday night visit from No. 14 Miami.

The Blue Devils (4-0, 1-0 Atlantic Coast Conference) have won their first four games for only the sixth time since 1960. A win against the preseason Coastal Division favorite Hurricanes (2-0, 0-0) will give them their first 5-0 start since 1994 — and maybe help Duke leap into the AP Top 25 from its position just outside the poll.

“You want to prove that this is a different Duke team, that this Duke team can handle big challenges, that it can overcome adversity when things don’t come our way,” center Austin Davis said. “Last year didn’t go our way. So this year we’re proving to people that we’re a different team.”

Now comes a short week with the Friday home game against Miami.

“I think our mind’s in the right place,” Duke coach David Cutcliffe said. “We’ve got to make sure our bodies are.”

The Hurricanes are making their first visit to Durham since a wild finish two years ago. Miami won that game on a final-play, eight-lateral kickoff return for a touchdown — a play the league later said shouldn’t have counted and led to the suspension of game officials.

“I think it will be an even better atmosphere,” Miami junior center Tyler Gauthier said. “They are undefeated, we are undefeated, and this is our first Coastal game, this is the one that means a lot. The coaches are preaching that throughout the entire practice: ‘This is the game that is very important to us.'”

MORE: A 6-step guide to making the College Football Playoff

Here are things to know about Friday’s Miami-Duke game:

FLORIDA’S BEST: Here’s good news for Miami — this week is only the fourth time since 2005 that the Hurricanes were the highest-ranked team from Florida in the AP Top 25. Here’s good news for Duke — each of Miami’s last three stints in that spot were very short-lived. Miami lost the same week it became the state’s top-ranked team after the polls of Oct. 3, 2010, Nov. 14, 2010 and Oct. 2, 2016.

ROSIER’S MATURATION: Malik Rosier is in his first year as Miami’s full-time starting quarterback, but the redshirt junior made his first career start in the Hurricanes’ wild walk-off win in 2015 with starter Brad Kaaya sidelined by a concussion. Rozier threw for 272 yards and two touchdowns. “It’s a different circumstance, as far as him being ‘The Guy’ now rather than, ‘Hey this game you got to jump in there and do well,'” Hurricanes coach Mark Richt said. “But I think playing there before can’t hurt.”

MIAMI’S SCHEDULE: The Hurricanes are playing just their third game after Hurricane Irma altered the team’s schedule. The team canceled its Sept. 9 game at Arkansas State and postponed a game against Florida State until Oct. 7.

FRIDAY NIGHT LIGHTS: Don’t consider Duke coach David Cutcliffe or Miami coach Mark Richt fans of a Friday night kickoff. Cutcliffe said he’s “a firm believer that Friday nights belong to high school football,” to which Richt responded: “I’m with him.” But even as Cutcliffe said it made him want to apologize to area high school players and coaches, he also said: “I can’t live in la-la land. We all know that programming and television is going to ask for more and more nontraditional playing nights.”

This article was written by Aaron Beard from The Associated Press and was legally licensed through the NewsCred publisher network. Please direct all licensing questions to legal@newscred.com.